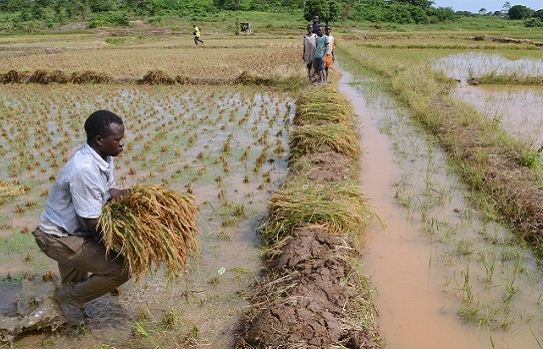 As Nigeria seeks to improve local production of rice, some rice farmers in Niger state are learning how they can increase productivity through improved farming practices, a better business model and enhanced infrastructure.

This is under the Fadama 111 additional financing project which has six states in focus.

The focus is on rice farmers in this part of Niger state which is well known for rice cultivation.

Though they have been in this business for generations, their harvest has been limited by lack of access to critical infrastructure.

Now that they are getting access to tractors, other critical inputs, training on improved farming practices and irrigation schemes such as this in Egbanti Twaki.

There are 150 hectares on this irrigation scheme and each farmer has a hectare. Altogether there are four of such schemes in Niger state.

The result has been an increase in yield for participating farmers who are organised into production clusters. From a previous average of three tonnes per hectare, the farmers are now getting an average of eight tonnes of rice per hectare.

All their harvest is sold at a premium to off-takers who they are linked with under the fadama 111 project.

Muhammadu Kolo is one of the fadama farmers in the state. He is even tagged a smart farmer because of how well he is now producing.

There are about one thousand rice farmers in Niger state who are participating in this project and learning how the value chain for rice can be a more productive business.