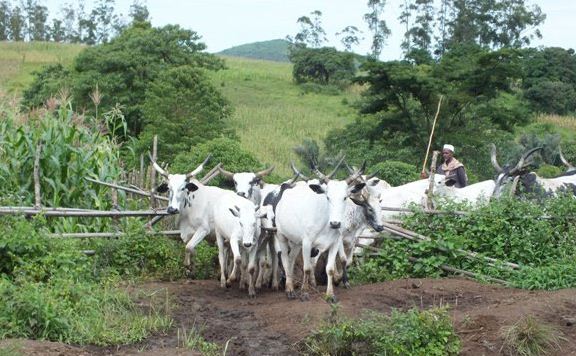 President Muhammadu Buhari and the state governors have agreed to establish ranches to address incessant farmers/herdsmen clashes instead of grazing reserves.

Plateau state Governor, Simon Lalong, made this disclosure on Sunday in Jos at the dedication of the new headquarters of Evangelical Church Winning All (ECWA).

He said that grazing reserves would not address the clashes and the killings, rather ranches would be established by government where the cattle would be kept in one place and fed.

The Governor said that government will provide facilities like medical, schools and other needs in the ranches to give support.

Lalong said that the ranches would not be for Fulani herdsmen alone but for whoever rears cattle.

He said that the Buhari’s administration inherited myriads of problems, saying that herdsmen/farmers clashes was just one of such problems and urged the people to be patient.

He urged Plateau citizens to pray for the state and the Federal Government as all the problems could not be solved in one year.

Also speaking, the Senator representing Plateau South, Lt.-Gen. Jeremiah Useni (rtd), said that delegates at the 2014 National Conference agreed that grazing reserves should be a state affair, not federal.

He said that it would be difficult for farmers to support the establishment of grazing areas as they would not donate their farms for grazing purposes.

In his sermon, Rev. Anthony Farinto, former ECWA President, called on leaders at all levels to urgently address the difficulties Nigerians were going through.

The cleric, who condemned the recent killing of a military official, urged the Federal Government to do all within its power to address the security challenges facing the country.

In attendance at the service, was the Kaduna State Deputy Governor, Bala Bantex.