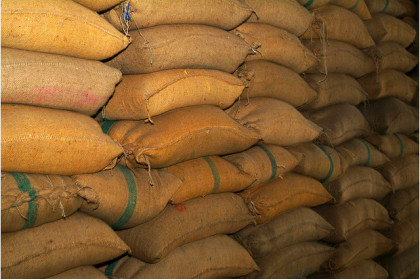 The Federal Government on Wednesday presented 1,470 tonnes of grains to farmers across the 21 Local Government Areas of Adamawa to cushion the effect of the Boko Haram attacks in the state.
Secretary to the Government of the Federation, Mr David Babachir, presented the food items to representatives of the Local Government Areas on Wednesday in Yola.
He said that the gesture was to cushion the hardship occasioned by the attacks on the people of the state by Boko Haram insurgents.
“For the past two years, thousands of farmers and their families were not  able to farm due to Boko Haram attacks.
“The development has caused a lot of adversity to the people in the state.
“The food items donated is aimed at reducing the difficulties, especially those in the worst hit seven local government areas in the state,” Babachir said.
Babachir was represented by Mr Ibrahim Bapatel, a Senior Special Assistant to President Muhammadu Buhari on Political Affairs.
The SGF said that the exercise was part of Federal Government’s effort in assisting communities of six states in the North-Eastern region affected by Boko Haram attacks.
He said that the seven worst hit areas of the state which include Madagali, Michika, Mubi North, Mubi South, Maiha, Hong and Gombi would be given special consideration in the distribution of the food items.
Responding, Mr Martins Babale, the Deputy Gov. of Adamawa, thanked the Federal Government for the gesture.
Babale said that the state government would continue to partner with the Federal Government in the rehabilitation, reconstruction and maintainance of peace in the state in particular and the region in general.
Similarly, the National Emergency Management Agency (NEMA) said it had distributed clothes to over 7,000 Internally Displaced Persons(IDPs) in Adamawa.
Mr Sa’ad Bello, the Agency’s state Coordinator made this known in an interview with News Agency of Nigeria (NAN) in Yola.
Bello said that the clothing materials were distributed early enough in preparation to the Eid- Fitr Sallah festival.
He said that the agency had also distributed food items worth millions of naira to Daware and Malkohi IDPs’ camps and Yolde Pate host community in Girei and Yola South LGAs respectively.
Bello said that the food presentation was part of the routine donation aimed at assisting the IDPs’ families living in the settlement camps across the state.
He urged the IDPs not to sell the commodity, saying that the Federal Government was working round the clock to ensure steady supply of relief materials to them. (NAN)