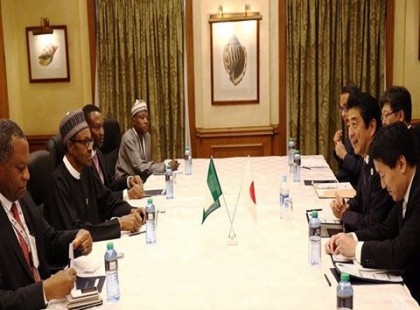 President Muhammadu Buhari says the Federal Government will sustain concrete measures to diversify the economy by devoting more resources to agriculture in the 2017 budget.

According to the statement issued by SSA on Media and Publicity, Garba Shehu, said the President made this known while Speaking to reporters in Nairobi, Kenya at the weekend on the margins of the sixth Tokyo International Conference on African Development (TICAD VI), President Buhari said African countries had a lot to learn from Japan on developing agriculture.

‘‘This year, in Nigeria, we started an aggressive farming programme that entails organising farmers into cooperatives in the second and third tier of government.

‘‘We intend to put more resources in our 2017 budget, especially in the procurement of machinery for land clearing, fertilizers, pesticides and training of less-educated farmers, as farm extension instructors.

‘‘We have already registered some success this year in a number of states, we identified some 13 states that will be self-sufficient in rice, wheat and grains before the end of 2018.

‘‘We are very positive that soon we will be able to export these food products. We are also lucky that the farming season in the northern part of the country has been very good and we are expecting a bumper harvest this year,’’ the President said.

On his expectation for TICAD, President Buhari said Japan’s story of rapid economic growth, hardwork and advanced technology should encourage Africans to strive harder and solve its development challenges.

‘‘Japan has greatly advanced in technology, particularly in solar power, infrastructure to spur growth in medium and small-scale industries.

‘‘Because of the advanced use of technology, farming and agriculture can become competitive.

‘‘Japan has the knowledge, technology and capital to assist African countries to develop and Japanese firms are in a very good position to successfully compete for the development of infrastructure in Nigeria,’’ he said.

The President then requested for increased participation of the Japanese government and the private sector in the Nigerian economy.