Agriculture Is Our Path Way Out Of Recession – Obasanjo 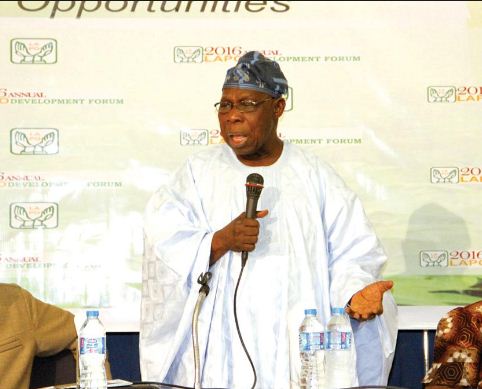 Nigeria’s former President Olusegun Obasanjo says agriculture is the way to go in getting the country out of recession, hence the need for the present government to keep faith with its promise of diversifying the economy through agriculture.

He made this submission at the 23th Annual Development Forum, with the theme theme ‘Food Security and Sustainable Agriculture in Nigeria: Challenges and Opportunities,’ organized by the Lift Above Poverty Organisation (LAPO) in Abuja.

The former President lamented on the increased level of hunger being experienced across the country, and stated that it was sad to note that about 65 per cent of the citizens were faced with food insecurity.

Obasanjo also called on the Federal Government, as a matter of urgency to drastically reduce or ban the importation of staple food crops, as Nigeria had the potential to produce most of the agricultural products that were being imported into the country.

“In 2016, the percentage of food insecure households increased from 33 per cent in February and March to 38 per cent in June and July, that is an increase of five per cent, which was as at June/July. We don’t know what it is now,” he said.

He said that Nigeria’s currency (Naira) is suffering because the country spends more than it earns, depending more on importation, usually on goods than can be easily produced here in Nigeria.

“It is Unpardonable for Nigerians to spend huge funds importing toothpicks.” He added.

Obasanjo said that the agriculture sector is viable enough to get Nigeria out of recession and called on the government to focus on agriculture and to put more efforts to guarantee food security in the nation.

The former President also spoke on the herdsmen/farmers clash in recent times, he stated that he gets angry when people blame President Muhammadu Buhari on the issue.

“This issue is not a federal issue and another thing I don’t like about it is that when you talk of Fulani herdsmen, people talk of the President.” He said.

Dr. Godwin Ehigiamusoe, Founder of LAPO, earlier in his remarks, said that the forum was organised in order to focus on issues and challenges of development, as well as address the imperatives of food security within the context of diversification of the national economy with agriculture as part of the process.