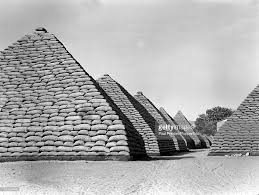 The Nigerian Government says plans have been concluded to rebuild the famous Kano groundnut pyramid through investment in intensive agricultural research and cash crop development.

The Minister for Agriculture, Dr. Audu Ogbe said that the scheme in no distant time, ‘‘wold boost farmers’ income through new groundnut varieties, cropping systems and processing technologies in Nigeria.’’

Dr Ogbe made was speaking at a three-day International Agricultural Workshop with the team: ’’Future Resilient Farming Systems For Semi-Arid Region of West and Central Africa held in conjunction with International Crops Research Institute for the Semi-Arid Tropics,  Bayero University Kano.

The Pyramid
The pyramids, 61 years ago were built in the ancient city of Kano, where groundnut production was a key part of the economy.

They were viewed as both a tourist attraction and a symbol of wealth as many were employed in the value chain of the business, especially the export component.

However, In the 1960s and 70s, as production in Nigeria shifted from agriculture to oil, the groundnut pyramids disappeared.

On this note, the Minister said THAT apart from groundnut, the Nigerian government was also looking to improving other areas of grain production.

‘‘The government was also committed to boost sorghum production, commercialization and industrial utilization through value chain public-private partnership. There was also plan to improve the livelihoods of smallholder farmers in drought prone areas of sub-Saharan Africa and South Asia through enhanced grain legume production and productivity,’’ he stated.

Dr Ogbe further explained that‘‘a programme had equally been designed to improve production of Sorghum and Millet for local consumption and exportation through Harnessing Opportunities for Productivity Enhancement, ’’’.

He stressed that Nigerian government recognized the strategic role of agricultural research in improving the livelihoods of farmers, appreciate the need for new investments in modern science-based agriculture and was therefore committed to supporting agricultural researches on a sustainable basis.

Similarly, the Vice Chancellor of the Bayero University Kano, Professor Muhammad Bello, who was the chief host of the event, said that the forum would provide opportunity for the outcome of various researches to be shared and practical interventions made to increase resilience and productivity in the agricultural sector.

Professor Bello urged ‘‘the participants to come out with workable outcomes that would increase crop and livestock production, as well as sustainable utilization of the environment in the coming years.’’

He appealed to governments, agencies, bi-lateral and multi-lateral institutions, including the private sector to improve funding to the agricultural sector for maximum production.

Meanwhile, Kano State Governor, Dr. Abdullahi Umar Ganduje, at the event lamented a situation where over the years, Nigeria had witnessed a gradual and consistent decline in productivity of important crops and livestock.

According to him, ‘‘there is need to boost research in agricultural products as such the forum provides greater opportunity for cross fertilization of ideas that will improve the agricultural sector in Nigeria, west Africa and the central Africa among others.’’