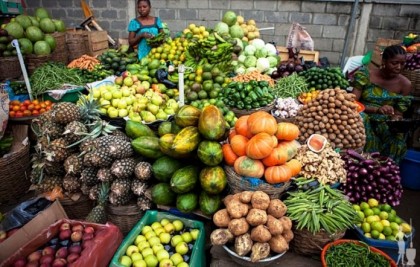 It is an indisputable fact that there is a symbiotic relationship between agriculture, national transformation and economic development in view of the role of agriculture in the provision of food, raw materials for industries and employment opportunities for Nigeria’s teeming population.

Before the discovery of crude oil in commercial quantity in the 1950s, agriculture was the mainstay of the national economy which was to a very large extent a multi commodity export economy but with the advent of oil, lesser and lesser attention started being given to the agricultural sector.

Before oil, Nigeria depended on agriculture for her foreign exchange earnings but with the neglect of agricultural sector, the country started encountering social, economic and political woes.

As fate would have it, many Nigerians are positive that with the present administration of President Muhammadu Buhari there would be a revolutionizing of the agricultural sector that would culminate in economic recovery, social, economic and political development of the nation-state that was recklessly and mercilessly looted by some greedy and unpatriotic people that have been distracting president Muhammadu Buhari from concentrating maximally on the arduous task of nation building and providing food through the revamping of the agricultural sector as food is one of the basic necessities of life that every responsive and responsible government must endeavor to provide for the masses. Be this as it may, every government whether civil of military or diarchy, no matter the regime type more often than not put premium on food security.

There have been various programmes, policies and projects of successive governments aimed at revamping the agricultural sector and enhancing food security.

The short-lived regime of President Umaru Yaradua also had a seven point agenda of which National Food Security programme was a cardinal element.

-It is discernible that this will significantly improve agricultural productivity and expand and improve large-scale production, storage and processing capacity as well as required infrastructure to achieve food stability and to derive over 50% of the nation’s foreign exchange.

Earlier, Nigeria was among the world’s leading producers of cocoa, palm oil, groundnuts, cotton, rubber and hides and skin and the agricultural sector contributed over 60% to the Gross Domestic Product (GDP).

To achieve national food security, there is need for substantial import substitution for rice, sugar and wheat coupled with provision of gainful employment and stemming of rural-urban migration.

Moreover, there is need for a major shift from the current subsistence nature of agriculture to modernized agricultural production storage, processing and marketing through private sector linkages and participation with required support and incentives from government, conservation of land and water and a radical departure from the prevalent rain fed agriculture to an irrigation farming system.

To achieve the objective of providing adequate food for Nigerians, the federal government has continued to provide fertilizer at a subsidized price to farmers endlessly.

Allied to this, there is the need for Nigerians to complement the efforts of the government by engaging in agriculture for the provision of adequate food, employment creation, and for the purpose of engendering health and peace in the nation.

One significant effort of federal government at food production and security is commercial agriculture development programme(CADP) targeted at farmers and organized private sectors that are into agriculture as business and are encouraged through deliberate public policy to undertake large-scale agricultural production using mechanization and best practices in post production activities.

The goal of the programme is to enhance food security, employment opportunities and the availability of raw materials for industries and generally for agriculture to serve as engine for a broad-based economic development in Nigeria.

THE OBJECTIVES OF THE PROGRAMME ARE
– Provision of food security for Nigerian population.
– Achieving substantial import substitution through local production of major commodities.
– Improve productivity, quality and efficiency and farmers access to inputs, credit and markets.
– Reduction of post harvest issues.
– Strengthening partnerships between public and private sectors and generate employment and develop market.

For the government to achieve the objective of enhancing food security in Nigeria there is also the need for government to properly educate farmers with the advancements in technology, as there are new and modernized farming equipments and machineries in the markets today.

Farmers need to be trained on how to use and operate these tools for better outcome. When farmers are well equipped and empowered, there would be the gross improvement in the sector which means the land would be adequately utilized and this would reduce food importation and increase employment rate in the country.

One bottle neck that is hampering the production of food crops in Nigeria is electricity. Farmers need power supply for processing and storage of their produce and perishable crops. Electricity is also needed to operate large farm equipments as nothing is done manually any longer as a result of technological advancement and globalization. Considering the fact that must farm yards are located miles away from the main road and township, good roads are needed for the transportation of harvested farm produce from one place to another.

Similarly, government at all levels should establish training schools and research institutes and encourage farmers to attend such training schools so as to equip and update them with basic skills for the better running of their farms.

In order to boost food production and conservation, low interest agriculture loans should also be made available especially for young farmer who have the passion for farming and fortunately President Muhammadu Buhari remarked during his 2016 independence Anniversary speech that the Federal Ministry of Agriculture and the Central Bank of Nigeria (CBN) have been mobilized to encourage the local production of rice, maize, millet among others to enable the country achieve its goal of self sufficiency in these staples by 2018. This is welcome, laudable and salutary.

To boost food production and enhance food security, it is also required that all hands should be on deck, we all should engage in agriculture no matter how big or small, it doesn’t take too much to start, cultivating a vegetable garden at the back yard of one’s house would save the cost of buying from the market.

Scholars of public administration often describe the civil service as the accomplishment side of government and one is very optimistic that with the implementation of all the programmes, policies, projects and activities highlighted in this feature story, agricultural production would be boosted, food security will be enhanced and the nation will move forward to the next level thereby engendering change which is the cardinal objective of this administration.