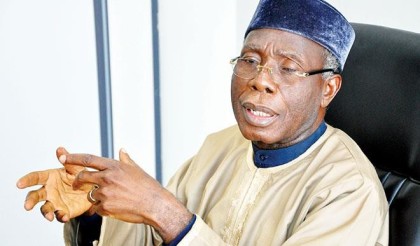 Minister of Agriculture and Rural Development, Chief Audu Ogbeh has challenged the committee on the re-launch of cocoa programme in Nigeria to ensure that Nigeria moves from her current position of number seven (7) in world cocoa production to the number one position.

The Minister who threw this challenge while inaugurating the committee on the re-launch of the cocoa programme in Nigeria in Abuja on Thursday, January 12, 2017, said that it is a shame that Nigeria that was a major producer of cocoa in the world has gone down to number seven.

He asked the committee to involve all persons and farmers that produce cocoa in the country, adding that as they proceed in the task, they should remember the country’s past mistakes in the oil and gas sector where the country misused the opportunity to create jobs and wealth for the citizens.

The committee which will be chaired by the Director Cocoa Research Institute of Nigeria, Dr. Olayiwola Olubamiwa is made up of some Directors of the ministry, President and Secretary Farmers Commodities Association of Nigeria (FACAN) and the Director Planning and Policy Co-ordination of the ministry to serve as member and secretary.

Chairman of the committee, Dr. Olayiwola Olubamiwa responding on behalf of the other members thanked the government for giving them the opportunity to serve and promise to deliver on the task given to them.

The re-launch will take place in Ondo state on Saturday March 4, 2017.