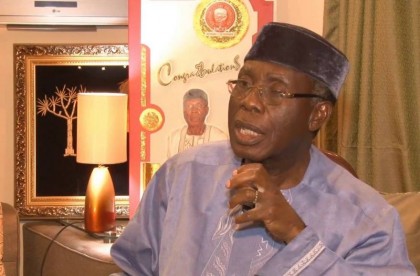 The Minister of Agriculture, Chief Audu Ogbeh, on Thursday in Abuja says there is no cabal in the government spearheaded fertiliser value chain in the country.

Ogbeh was reacting to media reports that the Federal Government would be defrauded to the tune of N46 billion in a fertiliser production agreement.

He said no cabal would take over the business.

“ I got a copy of the petition about a cabal taking over the business. No cabal will take the business and definitely, nobody is going to dupe Nigeria of N45 billion.

“We are buying phosphate and potassium from Morocco at a discount of 20 per cent lower than the world market price.

“When the phosphate and potassium arrive, they will be sold to blenders who will blend and sell fertilisers to farmers.

“That is the plan. They were complaining that small number of people want to hijack the blending. We have no plans to allow that to happen.

The minister said the Federal Government would encourage and support individual or company interested in the establishment of coconut, shea butter and cashew plantation in the country.

Ogbeh who said that coconut, shea butter was currently thriving in the cosmetic industry, added that setting up the plantation was necessary to enable Nigeria earn foreign exchange.

He said that the Federal Government would launch massive cocoa production programmes in Ondo and Cross River states by March, to encourage production.

The minister expressed regret that the country had lost its pride of place as the highest cocoa producing country in the world.

Ogbeh expressed optimism that Nigeria would return to its place within the next five years to overtake Vietnam being the highest producer of cashew nut in the world.

He said that plans were underway to return the Colleges of Agriculture across the country to the ministry, noting that they had been domiciled in the ministry of education.