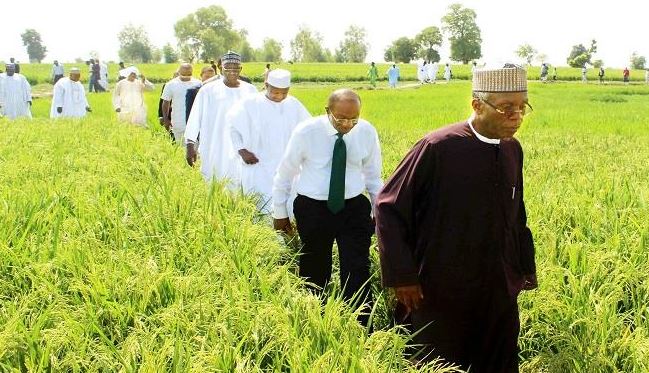 Gov. Atiku Bagudu of Kebbi says the state is planning to produce rice and livestock in commercial quantities for export to earn foreign exchange.

Bagudu said this in Birnin Kebbi on Thursday when he received a team of agricultural experts from the International Institute of Tropical Agriculture (IITA), Ibadan.

He said that Kebbi had recorded a 300-per-cent increase in rice and wheat production, adding that the state was second to Yobe in livestock production in the country.

He called on international research organisations to make a critical assessment of the agricultural policy of his administration which was particularly aimed at fully developing the state’s agricultural potential.

Bagudu also appealed to IITA to provide research outlets in the state so as to boost the capability of the state’s farmers in grains production and processing.

He said that the state also had a great potential in the production of crops like groundnut, soya beans, cowpeas, sesame seeds, banana, cocoyam, yam, millet, bambara nut, sugarcane, guinea-corn, cassava and ginger.

Speaking, the leader of the research team, Dr Kenton Dashiell, said that the institute had a global recognition as a centre of excellence for agricultural research and resources.

He said that the team was on a research mission to the state to learn about its agricultural potential.

Dashiell said that as specialists in soya bean cultivation, the visit would be an opportunity for the team to examine the state of soya bean production in Kebbi.

Also speaking, Alhaji Sahabi Augie, the State Chairman of Rice Farmers Association (AFAN), said that the association would collaborate with IITA in efforts to boost rice production in the state.

He appealed to the institute to assist farmers in the state by supplying them with improved rice seedlings so as to boost their production.

WACOT Rice Limited had recently  partenered with Kebbi state and initiated some strategies to attain sufficiency in rice production.

WACOT Rice Limited, a member of TGI Group, is helping Nigeria to strengthen its position as a major rice producing country in the West African sub-region.

It has invested in rice processing plants, while supporting the Kebbi Government to roll out sustainable agricultural standards and practices throughout the rice-production value chain.

The TGI Group recently inaugurated a modern rice mill, which has an installed capacity of producing 120,000 tonnes of rice every year, in Argungu.