FG To Ensure Supply Of Quality Seeds To Farmers – Ogbeh 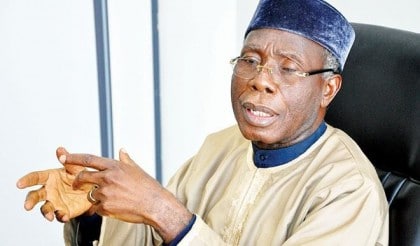 The Minister of Agriculture and Rural Development, Chief Audu. Ogbeh, says the ministry  is working with the Nigeria Security and Defense Corps (NSCDC) to ensure that quality seeds are supply to farmers by authorised seed dealers.

Ogbeh made this known on Tuesday in Gwagwalada, FCT, at the Seed Fair and Farmers’ Field Day, organised by the National Agricultural Seed council (NASC).

According to him, quality seed is paramount to enhancing agricultural productivity as it contributes more than 50 per cent of increased crop productivity in the country.

He said seed was very important to the sub-sector, and that any group or individuals engaged in selling adulterated seeds to farmers must face the fuĺ wrath of the law.

“I am a victim of fake seeds. I am a farmer you all know. I sent my manager to a shop to buy seeds. He got a very nice packaged envelops and when we opened them, they were broken seeds from the market.

“Over 70 per cent of people who have no business with seeds jump into the business and selling junk to farmers without getting certified by the seed council.”

“We are going to open extension offices in every local government to monitor the quality of seeds being supplied to farmers.

“And if they buy from authorized dealers and it turns out to be fake, report them to us. We will get police to arrest them, ” he said.

According to him, the Federal Government through NASC has over the year engaged in regulating the activities of seed producing entities.

He added that this was aimed at ensuring that enough quantities of improved quality seeds are available for farmers use across the country in any given time.

“We will try our best to pay seed companies we are owing. Without good seed, agriculture is impossible. So we want them to keep supplying that is why we will try and pay the debts.”

Dr Olusegun Ojo, the Director General, NASC, said that council has carried out sensitisation and campaign to educate the public in order to rid the market of fake and adulterated seeds.

He added that through the enforcement and surveillance activities, some fake and adulterated seeds were confiscated at various markets across the country.

“We organised a stakeholders workshop to develop a roadmap for efficient coordination of importation and marketing of vegetable seeds in the country.

“Let me reiterate to member of the public that seed business is highly regulated and there are procedures and guidelines for engaging in seed production and marketing.

“All intending groups and organisations going into seed business are hereby reminded that they must be duly accredited and licensed by the council.

“The council is prepared to clamp down on any unauthorised groups or individuals engaging in illegal seed business by selling fake seeds to innocent farmers, ” he said.

Mr Richard Olafare, the President, Seed Entrepreneur Association of Nigeria (SEEDAN) urged the Federal government to fasten in the payment for seeds supplied under the GES scheme.

He explained that recent efforts by the association to initiate the settlement of the outstanding debts should be accelerated to conclusion in order to avert the damage cause to the seed sector.

“Members of SEEDAN are worried about the delay in the payment for the seeds supplied under the GES, exposing several seed companies to threats And embarrassment from various banks.

“Some banks went as far as publishing list of so called defaulters seed companies in national newspapers. Some of our members are death with high blood pressure, ‘ he said. (NAN)