FG Plans To Lend To Farmers At 7% Interest Rate 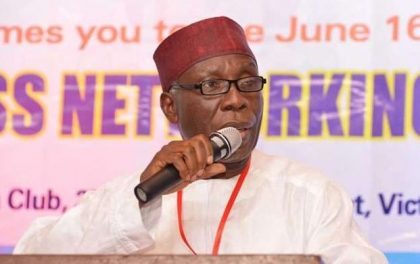 The Minister of Agriculture and Rural Development, Mr Audu Ogbeh, on Thursday said that plans were ongoing to restructure the Bank of Agriculture for greater efficiency.

Ogbeh, represented by Dr Olukayode Oyeleye, Adviser on Media and Communications in the ministry, gave the assurance at a conference organised by the Nigerian Association of Agricultural Journalists (NAAJ) in Lagos.

The conference had the theme: ”Showcasing Nigeria’s Agricultural Potential to the World.”

According to the minister, the restructure of Agriculture Bank will involve injecting cash into the bank so that farmers can borrow money at seven per cent interest rate.

“Since commercial banks’ interest rate is not favourable to farmers, the government has decided to reform the Bank of Agriculture to make it more relevant to farmers.

“It is important that farmers leverage on cooperative societies as they are vehicles through which extension services can be delivered to farmers,” he said.

Ogbeh said that the Federal Government’s concern for food safety and quality control had engendered more awareness in the six geo-political zones.

According to him, the government is working with UNIDO to enable farmers to key into global best practices in export of agriculture produce and value chain.

Mr Femi Oke, the Chairman of All Farmers Association of Nigeria (AFAN), said that farmers would do better if given a more favourable environment.
Oke said that federal and state governments should do more to encourage farming.

“The encouragement should be in the area of storage and preservation so that produce can be exported to improve farmers’ income,’’ Oke said. (NAN)