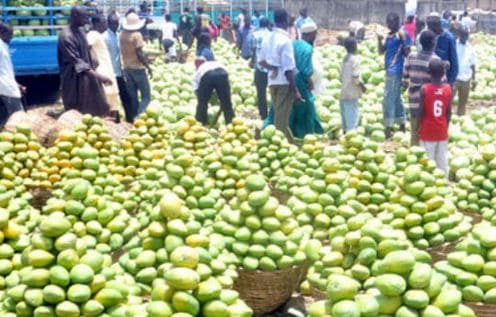 The Chairman of the association, Malam Muhammad Umar, said this in an interview in Kano.

He said the widespread  allegation that fruit sellers used insecticide and harmful chemicals to make fruits to ripe faster was not true, adding that “it was a deliberate attempt to tarnish the image of members in the state.

“A  newspaper report alleged that fruit sellers in Kano use insecticide, powder insect killer and other harmful substances on unripe fruits to make it ripe within a day; that was totally not true.”

He however, said “we only use carbide to ripen fruits, and before we start using it, we follow certain process, which include the involvement of the Environmental and Occupational Health Unit, Kano State Ministry of Health.”

Umar explained that the report of public analysis carried out by the Kano State Ministry of Health on the use of carbide in ripening fruits was approved to be safe.

He, however, said certain measures must be observed in the process, noting that
“the inner portion of the fruit should never be exposed.

“There should not be any direct contact between the product and the carbide and
all rotten or damaged products should never be sold to consumers but should be disposed.

“I assure you that our members always do their best to ensure that we follow the recommendations by the state’s Ministry of Health.”

According to him, apart from the approval by the state government in 2004, the association received additional approval from the Research Institute, Ahmadu Bello University Zaria on safe use of carbide.

He, therefore, urged the public to discard the false report, adding that “harmful insecticides have never been used to ripen fruits and will never be used.”

Responding, the former Head of Environmental and Occupation Unit, and Sarkin Tsaftar Kano, Alhaji Ja’afaru Gwarzo, confirmed being signatory to the approval letter issued to the association.

Gwarzo, who is also a Special Assistant to the state governor on ‘Sanitation Vanguard’, said “after thorough investigation on the safety of carbide in ripening fruits by an analysis in 2004, we were satisfied with the method, but with certain conditions.”