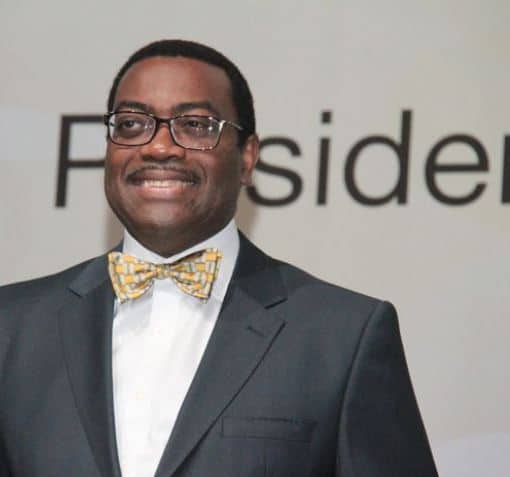 Why Adesina Won The 2017 World Prize For Food

President of the Foundation, Amb. Kenneth Quinn said Adesina won the prize “for driving change in African agriculture for over 25 years and improving food security for millions across the continent”.

Adesina, President of the African Development Bank (AfDB), was announced on Monday as the 2017 World Food Prize Laureate at a ceremony at the U.S. Department of Agriculture in Washington, D.C.

He said Adesina “led a major expansion of commercial bank lending to farmers as Vice President of Alliance for a Green Revolution in Africa (AGRA) and as Minister of Agriculture in Nigeria, introduced the E-Wallet system”.

Adesina also “introduced initiatives to exponentially increase the availability of credit for smallholder farmers across the African continent and galvanized the political will to transform African agriculture,” he said.

He said Adesina “grew up in poverty himself” and embarked on a journey to use his academic training to “lift up millions of people out of poverty, especially farmers in rural Africa”.

He explained that “as Nigeria’s Minister of Agriculture from 2011 to 2015, Adesina successfully transformed his country’s agriculture sector through bold reforms”.

He pointed out that in 2006, as Associate Director for Food Security at the Rockefeller Foundation, Adesina played a critical leadership role in organizing the Africa Fertilizer Summit in Abuja.

He said the summit was described as absolutely essential in igniting the campaign to spread a new Green Revolution across Africa, which led to the creation of AGRA.

“Our Laureate next played a leadership role in the development of AGRA, during which he led the effort to exponentially expand commercial credit for the agricultural sector and for farmers across the continent.

“And then, as Minister of Agriculture of his home country Nigeria, our Laureate introduced the E-Wallet system which broke the back of the corrupt elements that had controlled the fertilizer distribution system for 40 years.

“The reforms he implemented increased food production by 21 million metric tonnes and attracted 5.6 billion dollars in private sector investments, thus earning him the reputation as the ‘Farmer’s Minister’.”

Quinn said as the first person from agriculture to ever lead a regional development bank, Adesina’s receiving the Laureate Prize would give impetus in the coming decade to his profound vision.

Adesina is also the 46th person and the sixth African to win the World Food Prize.

Quinn commended Nigeria’s representation at the event to announce the winner of the Laureate Prize, won by a distinguished Nigeria.

“I am so pleased that Chargé d’Affaires Hakeem Balogun could be here for this announcement,” he said.

Former Minister of Finance Dr Ngozi Okonjo-Iweala was also present at the occasion, as well as U.S. Secretary of Agriculture Sonny Perdue, Congressmen, Ambassadors and members of the diplomatic corps.

Adesina will be presented the 250,000-dollar prize and Laureate sculpture at a ceremony at the Iowa State Capitol on Oct. 19.