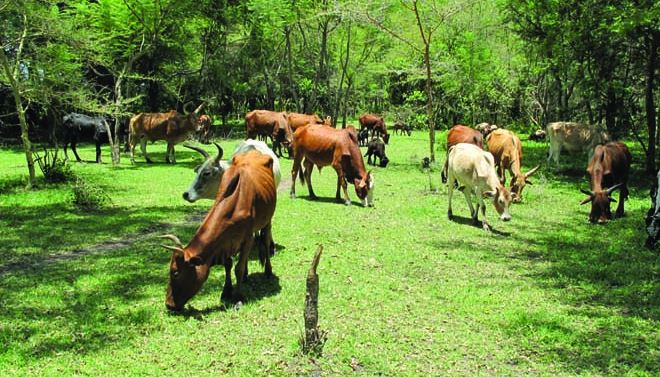 Gaidam, who said this in an interview with News Agency of Nigeria (NAN) in Damaturu on Friday, said that there were over two million herds of cattle, three million goats, 2.6 million sheep and 600, 000 camels in the state.

“There is a great economic potential that could be exploited in beef and dairy products in every part of the state because every household in Yobe State is engaged in livestock farming.

“These livestock deposits, when harnessed, will provide employment opportunities and boost the economy of the state,’’ he said.

Gaidam said that the abundance of livestock in Yobe would provide adequate and steady supply of raw materials for any meat and dairy factory in the state.

He said that the road constructed by the Yobe Government, linking Yunusari, Giedam, Yusufari, Machina and Nguru local government areas, had increased the volume of livestock trade in the state.

“There is increased trade in livestock in the state, as livestock transportation has been made easier with the newly constructed road,’’ he said.

Besides, Gaidam said that the incentives provided by the state government had improved livestock farming in the state, while making it more profitable.

“Government, through the Yobe Pilot Livestock Development Programme, has demarcated cattle routes, which has eliminated farmer/grazer conflicts, while providing free vaccination and routine clinical treatment of livestock in the headquarters, zonal offices and area offices.

“Similarly, the provision of free animal food supplements by the government and the construction of boreholes to provide livestock with clean and healthy water have collectively contributed to development of livestock farming in the state,’’ he added.