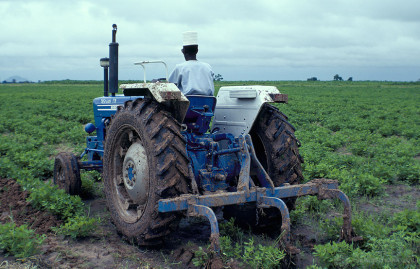 Farmers restarted cultivation as a result of the support they received from the FADAMA III programme and North-East Food Security and Livelihood Project amid improved security conditions.

Farmers in the liberated communities of Bumsa, Kukuwa, Buni Yadi and Gujba could now go to distant farms, following an improvement in security.
Malam Wakili Kaigama, a farmer in Bumsa, said: “When the communities were reclaimed by the troops, we still had some difficulties in going to the farms due to the fear of the unknown.

“But the situation has improved a lot and the FADAMA III programme has also supported us to cultivate the farms.
“Each of the 20 FADAMA III beneficiaries in this village received a water pumping machine, seeds, sprayers, herbicides and pesticides.
“I re-engaged in rice and banana cultivation with support from FADAMA III programme, four years after I abandoned the farm because of the activities of the Boko Haram insurgents,” Wakili said.
Alhaji Musa Garba, Project Coordinator of the FADAMA III programme in Yobe, said that 640 households in the two local government areas had been supported with irrigation facilities, livestock, poultry and food items under the World Bank-supported programme.
He disclosed that 48 communities in Gulani and Gujba LGAs benefitted from the support project.
“Each of these communities comprises 40 households and there are more than 15 persons in every household,” he said.
Abdu Liman, a poultry farmer in Buni, said that he was supported with 40 hybrid poultry layers, adding that his family now consumed eggs on a daily basis, while selling crates of eggs every day.
Malam Ali Bukar, a livestock beneficiary in Buni Yadi, said he was given five goats by FADAMA III programme, adding that the animals had since multiplied.
“My household was supported with three female goats and two male goats by FADAMA III programme; we now have 12 goats in the flock,” he said.
Garba, the state FADAMA coordinator, said the project provided food support packages, consisting of bags of rice, maize, sorghum and millet as well as vegetable oil, salt and sugar to every benefitting household.
“The livelihood package to households, which provides them with means of livelihood, involves the provision three female goats and a male goat or four sheep and a ram or chicken and guinea fowl layers,” he said.
NAN also reports that the FADAMA III project has constructed stalls and toilets in Bumsa, Gujba, Bularafa and Bara markets to boost economic activities in the communities.
Malam Usman Garba, a trader in Bumsa, said that the stalls had promoted commercial activities in the benefitting communities, while sheltering their wares from the rain, wind and sun, among other vagaries of weather. (NAN)

CATEGORIES AgricultureNews
TAGS Farmers restarted cultivation as a result of the support they received from the FADAMA III programme and North-East Food Security and Livelihood Project amid improved security conditions.
Share This