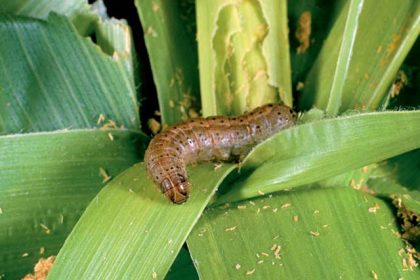 The Federal Ministry of Agriculture and Rural Development on Friday said it had trained 100 farmers selected from six states on the control and management of Fall Armyworm.

An official of the ministry and National Project Coordinator, Dr Mufutau Adeleye, said this in Kano while presenting inputs to the trainees after a two-day training.

He said the training, conducted in collaboration with the Food and Agriculture Organization (FAO), was designed to support the farmers to control the pest.

He said the participants were selected from Kano, Kaduna, Katsina Borno, Jigawa and the Federal Capital Territory (FCT).

He said the beneficiaries were given improved maize seed, pesticides, knapsack sprayers and protective kits, among others.

Adeleye said the ministry, in collaboration with the Food and Agriculture Organization, planned to conduct similar training in six more states as part of an effort to check the spread of the pest.

“Based on the survey carried out, the worm does not leave any crop. The survey also indicates that most states were affected by the worms,” he said.

The FAO Programme Officer,  represented the country Representative, Ms Adeola Akinrilola, said the outbreak of the worm in 2016 had affected a number of farms across the country.

She expressed hope that the beneficiaries would make the best use of the knowledge they acquired to check the spread of the pest in their respective states.

Some of the farmers, who spoke to NAN, expressed happiness on the training and commended the ministry for supporting them with inputs free. (NAN)