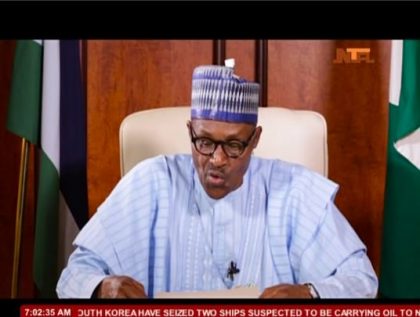 President Muhammadu Buhari says Nigerians have got to get used to discipline and direction in economic management as the days of business as usual are numbered.

The president stated this in his address to the nation in Abuja on Monday to mark the beginning of 2018.

According to him, it is in view of this reality that in 2015 he appealed to people to go back to the land.

He announced that Nigeria would stop importation of rice from 2018, to encourage the production of local rice.

“I am highly gratified that agriculture has picked up, contributing to the government’s effort to re-structure the economy.

“Rice imports will stop this year. Local rice, fresher and more nutritious rice will be on our dishes from now on.

“By the same token, I am today appealing to enterprising Nigerians with ideas and unemployed graduates and other able-bodied and literate men and women with ideas, not to just sit and wait for employment from the government or the Organized Private Sector.

“Great nations are built by enterprising people who turn their hands to anything that circumstances dictate,’’ he said.

He noted that the All Progressives Congress-led Federal Government was slowly stabilising the economy.

The president further said that the diversification efforts embarked upon by the government had resulted in improved output, particularly in agriculture and solid minerals sectors.

On power, President Buhari noted that more Nigerians across the country were experiencing improved power supply to their homes and businesses.

He, however, observed that power had remained a concern to his administration because not many people enjoyed regular and reliable supply.

He stated that the Payment Assurance Guarantee Scheme, which started in January 2016, had enabled the Nigerian Bulk Electricity Trader to raise N701 billion to assure Generation Companies of at least 80 per cent payment for any power delivered to the national grid.

Consequently, he said generation had now reached 7,000 megawatts while on Dec. 8, 2017, the country achieved 5,155 megawatts of power delivered to consumers, the highest level ever recorded.

According to the president, several moribund projects have been revived while repairs of Afam Power Station added 110MW in 2017 and another 240MW will be added this year through a private investment partnership.

“Katsina Power Project is now being tested and producing 10MW of power from wind for the first time in Nigeria. It should be fully operational this year.

“The Zungeru 700MW Hydroelectric Power Project, stalled by court cases is due for completion in 2019.

“A landmark project, Mambilla Hydroelectric Power Project, is at last taking off. This project has been on the drawing Board for 40 years,’’ he said.

The president, however, revealed that the engineering, procurement and construction contract for the Mambilla 3,050 megawatts project had been agreed with a Chinese joint venture company with a financing commitment from the government of China.

He said 2023 was targeted as completion period for the project.

He said the sub-stations included those at Ikot Ekpene, Aba, Alagbon, Ajah, Ejigbo, Funtua and Zaria.

He stated that the Federal Government was working with the privatised distribution Companies to overcome the continuing challenges of distribution.

Buhari, therefore, expressed the hope that these massive public works should spearhead the recovery and lead millions back to employment.

“You will recall that it was not until last year that we got out of the economic recession, into which the country had fallen as a consequence of past unsustainable economic policies, which projected short-term illusory growth.’’(NAN)