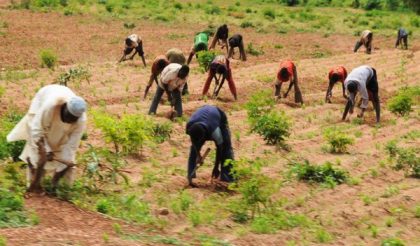 Zuma FM held a six hour live interactive session with farmers to flag off the annual planting season. Zuma 88.5 FM, a community radio station based in Suleja, holds an annual event called the Zuma Agricultural Harvest Festival to celebrate agriculture and provide a platform for exhibitions, support and agro-business education for rural farmers in Suleja and it’s environs including Niger, Kaduna, Nasarawa, Kogi states and the FCT.

Among the programme of events was a review of loan applications and account opening sessions to help the rural farmers build capital for small and medium agro-businesses as well as distribution of fertilizer for attendees.
In an address to the participants, the COO of Zuma 88.5 FM, Festival Director and convener of the Agricultural Harvest Festival, Mr Kere Ahmed, expressed his satisfaction on the turnout at the maiden edition of the festival which took place in November 2017, thanking the farmers for their attendance.

Kere-Ahmed further enjoined the farmers to avail themselves for this year’s event, informing them of plans to make the Zuma Agricultural Harvest Festival a successful annual event that will indeed help farmers and their businesses. He noted that there will be different phases of fertilizer distribution because the planting calendar varies from crop to crop and hoped for greater impact as this year’s festival follows the entire planting season from start to finish.