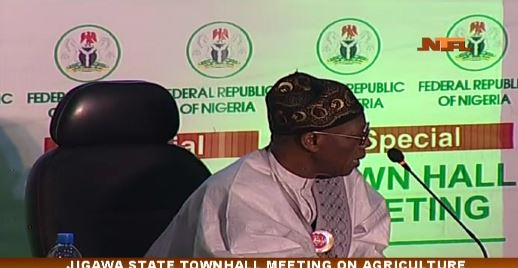 Opposition Will not Derail our Agricultural Revolution- FG

The Federal Government says no amount of external opposition and resistance will derail its agricultural revolution.

The Minister of Information and Culture, Alhaji Lai Mohammed, stated this on Monday in Dutse at the Special Town Hall Meeting on Agriculture.

The minister also said that the administration’s agricultural revolution would ultimately lead to self-sufficiency in national staples.

In his opening remarks, Mohammed said that the Federal Government had made a giant stride in agriculture widely regarded as one of the success stories of the administration.

The minister, however, alerted Nigerians to the growing external opposition to the success story and how opposition political parties were latching in on it for selfish political gains.

“In pursuing our agricultural revolution, we should not expect accolades and support from outside, especially from countries that have hitherto been the main exporters of food items such as rice to Nigeria.

“Every nation pursues its national interest, and it is definitely not in their interest for Nigeria to produce what it consumes, because it means you will no longer import from such countries,” he said.

As an example of the opposition, the minister recalled the purported report on 2018 Nigeria’s rice importation by the United States Department of Agriculture (USDA) World Markets and Trade Report.

“Nigerians should see the recent fake news that Nigeria imported 400,000 metric tonnes more than the quantity of rice imported in 2017.

“When the figures were challenged, they said it was based on the assumptions -unrealistic as they were – such as satellite mapping of farms, expected demand by politicians for election campaigns and expected losses from flooding.

“Fortunately, the Central Bank of Nigeria (CBN) has debunked this report, saying the volume of rice importation into Nigeria (in metric tonnes) declined drastically in 2018,” he said.

The minister said that the figures obtained from India and Thailand, both dominant rice exporters to Nigeria, indicated that as at September, Thailand had so far exported about 5,161 metric tonnes of rice to Nigeria.

He said on its part, India sold only 426 MT to the country as at July.

Mohammed recalled that as at September 2015, rice importation from Thailand was 644,131 MT.

“The reduction is due to concerted efforts by the Ministry of Agriculture and the interventions of the Central Bank of Nigeria.

“In fact, the CBN said it had not allocated foreign exchange for the importation of rice this year.

“So those who claimed that Nigeria imported 400,000 MT of rice more this year have not been empirical,’’ he said.

The minister noted that conspiracy to thwart Nigeria’s push toward self-sufficiency in rice did not just start.

He recalled that in 2015, the government was put under undue pressure to import rice ostensibly to make up for a massive shortage when in reality there was a glut of paddy rice produced locally.

The minister stressed that no amount of opposition, fake news and pressure would hinder the government from pursuing its agricultural revolution to its desired ends.

Corroborating the minister’s position, the Governor of CBN, Godwin Emefiele, said no approval was given for importation of rice to the tune of what was contained in the purported data by USDA.

Represented by Mr Olatunde Akande, his Special Adviser, the apex bank boss said there was over 60 per cent reduction in the importation of rice, sugar, milk, sorghum and tomato between 2013 and 2017.

The CBN governor also disclosed that the bank had disbursed N160 billion to 850,000 smallholder farmers under the Federal Government’s Anchor Borrowers Programme.