A Poultry Farmer, Mr. Sunday Adejoh, has called for a mechanism that will ensure the price stabilization for Day Old Chicks (DOCs) in the country ahead of the Easter celebration. 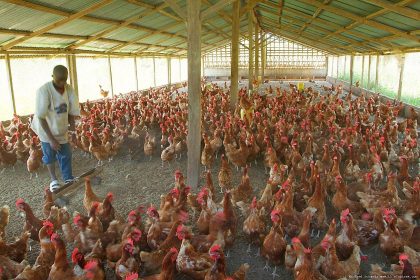 Adejoh, who is the Chief Executive Officer of 12 Gates Farm, made the call in an interview with News Agency of Nigeria (NAN) in Abuja on Thursday.

He expressed concern over fluctuations in the price of DOCs in the country.

He called on the relevant agencies to check the arbitrary increase of the price of DOCs leading to hiking in the prices of chickens during major festivals such as Easter.

“The festivity has nothing to do with the hike in price now as the hatcheries determine their price at will without cause.

“Day Old Chicks are always selling between N330 to N400 each during festivity with farmers bearing the loss of mortality upon arrival and before maturity.

“If the cost of production (electricity, feeds among others) is stable then I don’t believe there should be an increase in the price of the chick before or after festive periods.

“The most disheartening aspect of this whole issue is that there is no guarantee that the birds will survive till maturity.

“Some of these birds come with hatchery related issues, which results in high mortality and nothing is done when you complain. No refund or replacement is made. The farmer bears the loss.

“Further, after going through all these and if a farmer is lucky to manage few birds to maturity then the battle to sell begins,’’ he said.

Adejoh explained that a dressed bird weighing 1.5kg sold in the market at N1,500 to N1,700 and for a bird to have that weight it must have been properly fed.

The farmer noted that the chicken feed was also expensive and so the farmer has to increase the price of his chicken and the masses bear the burden.

According to him, at times the farmer sells at a loss. Eventually, it is translated that the agencies whose function is to act are not doing anything.

“As much as the government is trying to give agriculture a facelift, if things like this continue to happen then we are still back to zero,’’ he said.

He, however, said that imported chicken smuggled into the country was cheaper than those raised in the country because it was laced with all sorts of chemical for preservation.

Adejoh said that farmers were not supposed to be struggling to sell their farm produce, adding that local products should not be expensive.

“I plead with everyone who has the power to make a change to do something. Farmers are not happy. We are looking up to the government at all levels to create a conducive environment for farmers.

Mr. Haruna Akeem, Assistant Project Officer, Oyo state Ministry of Agriculture, told NAN that the problem would continue yearly until the Nigerian government sets up price regulatory body on commodities in the market.

“Though a change in price may occur due to a sudden change in some factors of production it should not be as wide as it used to be.

“Pricing is dependent on many factors such as production, packaging and transportation costs.

“This has been a major determinant to retailers. To reduce the cost of DOCs efforts toward leveraging these factors are crucial.

“My submission is that there should be agro commodities price control unit starting from the local government level up to the federal level.

An agriculturist, Mr. Harry Folami, said before the advent of a price regulatory body, the government should introduce some measures including subsidies.

He stressed the need for quick government’s intervention and provision of subsidy, adding that some other things may contribute to a hike in the price of agro commodities.