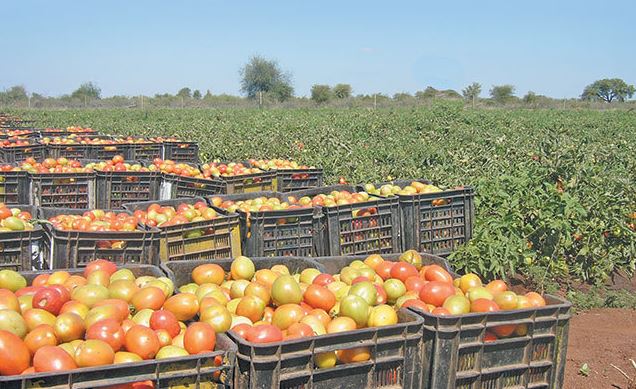 Farmers across the country have called on government to curb the activities of middlemen, describing them as agents of food insecurity, exploitative and parasites.

The farmers told the News Agency of Nigeria (NAN) in Abuja on Tuesday that there were enough evidences to prove that the middle men exploited them and eroded their profits, which hampers government efforts for agricultural development.

The farmers called for quick intervention of government to get relief from middlemen, describing the middlemen as the menace that continued to deprive the farmers of their dividend in spite of numerous efforts to make ends meet.

They observed that their vulnerability to middleman was due to several factors, which include distance from market, high cost of transportation and lack of credit.

Others are lack of insurance and storage facilities, which they claimed compelled farmers to respond to the dictates of the middlemen to make immediate sale at below the cost price.

Mallam Alli Kano, a rice farmer in Kura, Kano State, noted that government and other concerned agencies needed to act fast because the activities of middlemen were chasing many farmers away from farms.

He said that the assertion of middlemen on the farmers to dictate and raise prices for consumers usually led to high production costs in their efforts to boost production but hardly got fair pricing of their products from the middlemen.

Kano said that the real profit went to the middlemen who bought up the farm products at almost give-away prices and sold at outrageous prices to the consumers.

“This attitude of middlemen have discouraged genuine investors from getting into agriculture because of the marginal profit associated with it the business as cart away the bulk of the profits.

“Thus, the activities of middlemen seem to be a threat to food security as their activities in all areas where they operate are indications that they stand in the way of food security, progress in farming and self-sufficiency.

“Globally middlemen stand in the way of food security and poverty alleviation but government must take a drastic measure to fight them,’’ he said.

Mallam Suraji Illiyasu, a cotton farmer in Gombe said that the activities of the middlemen were one of the contributing factors to cotton rejection in the international markets.

He said that to get rid of the illegal activities could take awhile because most of the farmers were illiterate, but with the advent of educated youth farmers and technological innovations, the youth farmers would change the status and would soon render them inactive.

Illiyasu said that government should take a stringent measure to curb their activities and make effort to reintroduce the commodity boards as a way to bring the producer closer to the end buyer and make farmers get adequate dividend for their efforts.

He said that the middlemen were also the fundamental cause of food inflation because they usually hoard both perishable and non-perishable commodities, thereby creating artificial shortages across all food categories to dictate the prices of such commodities later.

“Most of them always dictate the price of food items thereby chasing away credible customers and also they usually intentionally created artificial scarcity.’’

Mrs Theresa Agbowuro, a Cassava farmer in Aisegba Ekiti, described the middlemen as opportunists that usually reaped where they did not sow and reaped the benefits by rising food prices.

She called on the three tiers of government to take immediate action to curb the activities of the middlemen, saying that most of the farmers who ignored the middlemen always ran into problem and lost their produce.

Agbowuro said in most cases, a lot of the affected farmers always paid dearly for their actions as they always found it very difficult to sell their produce.

Mallam Awalu Kabai, a farmer in Auta-Balefi, Nassarawa state said that middlemen had intercepted most of the Federal Government’s agricultural schemes making it unattractive to the beneficiaries.

He said that the activities of some of the middlemen were  militating against some of government’s schemes such as FADAMA, CBN/Anchor Borrowers Programme and Nigeria Incentive-Based Risk-Sharing System for Agricultural Lending (NIRSAL) and they also cut across all agricultural sectors.

Kabai said that in the areas of government schemes most of these middlemen posed as political farmers or cooperative heads with the intent to defraud the farmers.

“NIRSAL sometime ago confirmed that it has information that some “aggregators” have fraudulently collected monies from farmers promising to deliver loan facilities through the CBN/ABP and other NIRSAL funding windows.

“In most cases, the activities of the middlemen and farmers usually lead to crisis leading to untold losses and hardship on the farmers,’’ he said.

Kabai said that if government did not go into action on time to check the activities of fraudulent middlemen in the agric loan sector, it could crumble the good intention of government.

“Because their huge demand is frustrating some of the peasant farmers to abandon the projects,’’ he said.

Mrs Bisi Adeshida, a farmer in Ogbese, Ondo State said that the middlemen were in all areas of agriculture, “be it the financial sector, government schemes for agriculture and commodity venues, they have invaded both the yam, rice, ram, poultry and palm oil sector of agriculture.’’

She said that because government at all levels had allowed them free hand to operate and even hijacked most of their programmes, they thrived because they always encountered less resistance.

Adeshida said that during the festive time, “it is the middlemen that always dictate the prices of domestic animals for sale and any of the traders that flaunted the law will pay for it.’’

Mr Pious Akinlade, a FADAMA beneficiary in Kogi state said that to create a competitive market, government must intervene and curb the activities of the middlemen.

“Something urgent must be done; farmers cannot be labouring for middlemen to reap the gains.

“There are times when they invade the markets and  their wishes become law and any farmers that flaunted the law will be made to lose his/her produce.’’

He said that lack of many socio amenities was also encouraging the activities of middlemen.

Akinlade said that because of the high cost, transport and bad roads, farmers were always forced to sell their produce at the farm gate to middlemen who acted as commissioners on behalf of wholesalers.

Mrs Veronica Ezumezu, a trader in Masaka market noted that the middleman had made the cost of food beyond the reach of the peasant traders and the common man.

She said that before, the small traders used to negotiate the price of produce freely with the farmers at the farm gate but now such traders must negotiate with the middlemen.

“Staple crops like maize, millet, cassava, beans, yam, cassava, plantain and vegetables are very cheap right from the farm but once the middlemen are involved, they will introduced various taxes or buy the produce at the farm gate, forcing the traders to buy from them.

“In the end, such will lead to increase in the price of food stuffs and vegetables in the markets,” she said.

Ezumezu lamented that the middleman had turned themselves to tyranny at farm gates in most markets on all produce and in the end they paid peanuts to farmers.

He lamented that compensation was not enough to meet other basic needs as farmers continued to wallow in poverty, while some would struggle to repay their loans because of the middlemen phenomena.

Mr Sanjo Fasunla, an agricultural expert described the middlemen as an impediment to farmers and the renewed determination by government to empower agriculturists for improved productivity and attainment of food security in the country.

He said that the middlemen had become monopoly buyers of agricultural produce to the deteriment of the farmers.

Fasunla said that government and relevant agencies needed to act fast because the activities of the middlemen were discouraging the investors.

“This is having a terrible implication in the supply value chain of agricultural products.’’