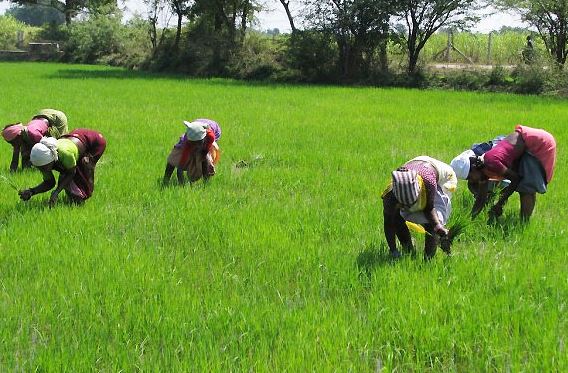 No fewer than 2,500 rice and cassava farmers have been empowered with farm inputs by both the Federal and Ogun Governments under the Value Chain Development Programme (VCDP).

The empowerment of the farmers was in conjunction with the International Fund for Agricultural Development (IFAD).

The Commissioner for Agriculture, Dr Adeola Odedina, disclosed this while inaugurating the 2020 Inputs Redemption to Value Chain Development Programme (VCDP) farmers under the FGN/OGSG/IFAD arrangement in Odeda Local Government Area of the state.

Odedina said that the programme was one of the many laudable agricultural schemes facilitated by Gov. Dapo Abiodun to assist farmers, as well as meet the challenges of food security in the state.

He noted that notwithstanding the effects of the Coronavirus pandemic, the State Government would continue to expand its agricultural activities.

He added that it would continue to explore available agricultural opportunities at all levels for the good of its farmers.

According to him, the agricultural roadmap of the state has been revised to address envisaged effects of the pandemic.

“We are not stopping agricultural activities, even in the heights of the COVID-19. We can see that other states have started following our footsteps in the state’s agricultural success.

“We are not going to starve in Ogun State, pandemic or not. It will not affect us in this period as we will open all opportunities to ensure food security,” he said.

He noted that apart from the Anchor Borrowers’ Programme, the state has other agricultural programmes that include the Ogun State VCDP.

Odedina said that through the programme, the government had demonstrated its capacity to manage the surge in the number of applications for agricultural opportunities.

According to him, it is because of the continuous advocacy of the state government that attracted investors and many other international organisations into the state.

The commissioner also said that the Central Bank of Nigeria (CBN) had also expressed its interest in other commodities.

He, however, pleaded with the farmers to make use of the inputs distributed to them effectively on their farmlands in order to improve their yields.

The coordinator said that the implementation of the programme was in line with the objectives of the Agricultural Promotion Policy (APP) and the National Economic Recovery and Growth Plan.

“The objective is to crystallise a marked-led- value-added production, processing and marketing of rice and cassava commodities and other products by smallholder farmers,” he said.

He also said that the objective of the programme would be achieved through the adoption of best practices and innovations that increased efficiencies of the value chain of the commodities.

Adeogun noted that youths would be attracted to farming, adding that gender inclusiveness would also be ensured, through the programme.

“The inputs’ support is under the matching grant arrangement in which the farmers pay 50 per cent of the cost of the inputs, while the government pays 50 per cent using the Growth Enhancement Scheme (GES) module.

“However, because of the outbreak of COVID-19 pandemic this year 2020, the programme reviewed the arrangements, stating that farmers will pay 40 per cent while the government will subsidise the payment by 60 per cent.

”Women and youth farmer groups are to pay 30 per cent while the government will pay 70 per cent,” Adeogun said.

He noted that the programme is in line with the agricultural revolution initiatives of the current administration.

According to him, Ogun is the only state among the nine states in the South-west where the VCDP is being implemented.

According to him, this phase of the inputs’ distribution for 2020 planting season for both cassava and rice is the fifth since the inception of the programme.

He added that since the inception of the FGN/IFAD/VCDP, over 8,000 smallholder farmers had been supported with inputs to cultivate no less than 9,000 hectares of rice and cassava across the eight participating LGSs in the state.

The state coordinator, however, appealed to the beneficiaries to judiciously utilise the inputs in order for them to achieve higher productivity.
Chief Taofeek Odedina responding on behalf of other beneficiaries commended the government and IFAD-VCDP for their support.

He assured them that they would effectively use the inputs in their various farmlands to boost production.