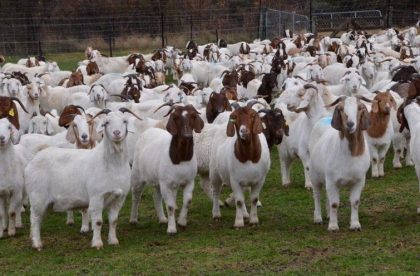 The Islamic Development Bank, IsDB, in conjunction with the Lives and Livelihood Fund, LLF has released about N74 million Naira, for purchase of vaccines and other consumables for Mass Livestock Vaccination Campaign in Kano state.
The fund was apportioned through the Islamic Solidarity Fund ISFD, the poverty alleviation arm of the Islamic Development Bank Group, to the Kano Agro-Pastoral Development Project, KSADP, for the vaccination of cattle, sheep and goats against major diseases challenging their productivity and health.
Livestock health and productivity are serious concerns in not only Kano but the whole of Nigeria. An indication of this problem is that the country imports 60 percent of its milk requirement, implying that local production cannot meet up with demand.
At the moment, Nigeria’s milk and dairy products importation stands at about 1. 5 billion USD, which is presumably as result of the prolonged neglect of the livestock sector by successive governments.
Flagging off the vaccination at Dansoshiya Grazing Reserve, Kiru local government, the governor of Kano State, Dr. Abdullahi Umar Ganduje said: “I must emphasize that besides playing a major role in protecting animal health and reducing their suffering, this vaccination is an issue of serious public health concern because it prevents animal to human transmission of diseases and enables efficient production of Halal animal-derived food products to feed our growing population”.
According to him, “we must remain committed to securing the health of our animals because research has shown that milk and meat provide a vital source of nutrition for the populace, especially vulnerable groups such as children and sick people”.
Highlighting that the livestock vaccination was free, Governor Ganduje urged herdsmen and those engaged in domestic animals reproduction and fattening in Kano, to take advantage of the exercise for the well being of their livestock.
The governor was delighted that the KSADP has concluded arrangement to award contract for the construction of a Veterinary Reference Laboratory, to perform quality and cost-effective high volume testing for improved animal health.

“Let me stress our resolve to actualize the Dansoshiya Ruga project which will greatly reduce movement of herdsmen from the North to other parts of the country. We are surveying for establishment of other similar settlements in Dudduru in Gaya Local Government, in Fanyabo in T/Wada, in Matan Fada in Kunchi, Zoza in Rogo and at Zaura Babba in Ungogo Local Governments”, he added.

Dr. Ganduje thanked the Islamic Development Bank and the Lives and Livelihood Fund for their support towards initiating the Kano Agro-Pastoral Development Project, KSADP, which he described as a flagship project of his administration.

The State Project Coordinator, Kano Agro-Pastoral Development Project, KSADP, Malam Ibrahim Garba Muhammad explained that the vaccination, which would be conducted with the active collaboration of the state Ministry of Agriculture, would last for 10 days, adding that 520 inoculators would conduct the exercise under the supervision of 25 veterinary doctors.

Head of Dansoshiya pastoralists communities, Alh. Abubakar Rabo, said the vaccination was a turning point for them since such activity has not been conducted in the past few years, as a result of which many livestock were lost to illnesses, which could have been averted with vaccination.

In a goodwill message to the occasion, the Federal Ministry of Agriculture, represented by Dr. Yahya Tanko described the KSADP as a noble project which was in line with the Federal Government’s Livestock Productivity and Resilience Support Project.