WASHINGTON, October 8, 2014–With the latest death toll from Ebola now at 3,439 in the three worst-affected countries of Guinea, Liberia, and Sierra Leone, a new economic impact assessment from the World Bank Group says that if the epidemic was to significantly infect people in neighbouring countries, some of which have much larger economies, the two-year regional financial impact could reach US$32.6 billion by the end of 2015. 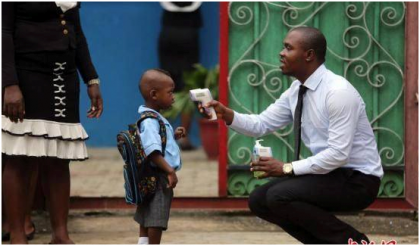 A teacher checking the temperature of a pupil returning to school

The new World Bank Group report notes,” as it is far from certain that the epidemic will be fully contained by December 2014 and in light of the considerable uncertainty about its future trajectory, two alternative scenarios are used to estimate the medium-term (2015) impact of the epidemic, extending to the end of calendar year 2015.”  A “Low Ebola” scenario corresponds to rapid containment within the three most severely affected countries, while “High Ebola” corresponds to slower containment in the three countries, with broader regional contagion. 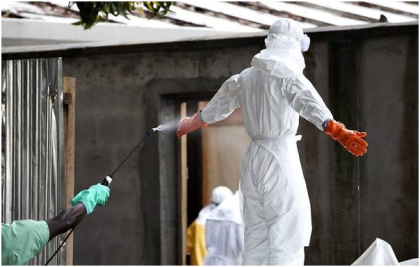 An Ebola medical personnel being sprayed with disinfectant

According to the World Bank Group’s new analysis, the economic impacts of Ebola are already very serious in the core three countries – particularly Liberia and Sierra Leone – and could become catastrophic under a slow-containment, High Ebola scenario. In broader regional terms, the economic impact could be limited if immediate national and international action stop the epidemic and alleviate the “aversion behaviour” or fear factor that is causing neighbouring countries to close their borders, and airlines and other regional and international companies to suspend their commercial activities in the three worst-affected countries.

The successful containment of Ebola in Nigeria and Senegal so far is evidence that this is possible, given some existing health system capacity and a resolute policy response.An Ebola medical personnel being sprayed with disinfectant

“With Ebola’s potential to inflict massive economic costs on Guinea, Liberia, and Sierra Leone and the rest of their neighbors in West Africa, the international community must find ways to get past logistical roadblocks and bring in more doctors and trained medical staff, more hospital beds, and more health and development support to help stop Ebola in its tracks,” says Jim Yong Kim, the President of the World Bank Group. 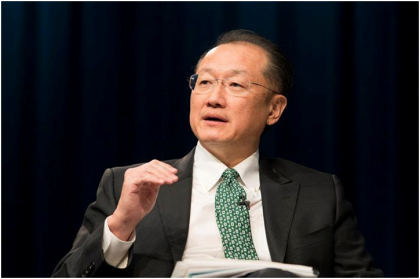 ““The international community now must act on the knowledge that weak public health infrastructure, institutions, and systems in many fragile countries are a threat not only to their own citizens but also to their trading partners and the world at large,” says WBG President Kim. “The enormous economic cost of the current outbreak to the affected countries and the world could have been avoided by prudent ongoing investment in health systems-strengthening.’’

The World Bank Group is supporting country responses in line with the WHO Roadmap, and is coordinating assistance closely with the United Nations and other international and country partners.

As the new report notes, “effort and memory will be required to sustain and continue strengthening this early warning network and the complementary investments in effective and resilient African health systems after the Ebola outbreak has been contained. Taken together, the containment effort, the fiscal support, the restoration of investor confidence, and the expanded disease surveillance, diagnostic and treatment capacity promise to first stem the Ebola epidemic, and then help to reverse as quickly as possible the aversion behaviour that is causing so much economic damage. “

A key issue looking forward will be to re-establish investor trust so that as the epidemic is contained, domestic and international investment can return. The World Bank Group says urgent policies will be needed to jumpstart the renewed flow of relief and commercial activity (for health, business, and tourism purposes) with the affected countries while also safeguarding other countries from epidemiological contagion. To this end, options should be explored for financing improvements to health security infrastructure and protocols of the seaports and airports of the three core countries and their neighbors.

To this end, the World Bank Group is mobilizing $400 million in emergency financing for the three countries hardest-hit by the crisis.

LIVE EVENT: Impact of the Ebola Crisis: A Perspective from Countrieshttp://live.worldbank.org/impact-of-ebola-crisis