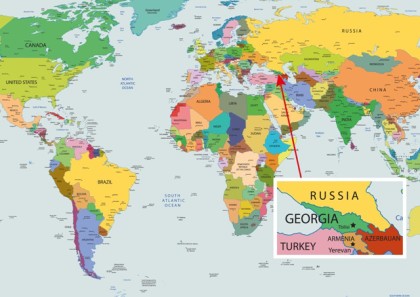 Sometimes you have to be careful the name you call a thing, or in this case a day! In an ironic twist of ‘day’, a fist fight erupted today between lawmakers in the Georgian parliament.

While the rest of the world was celebrating, there seems to be little in the way of festive “goodwill to all men” in the Georgian parliament as a brawl reminiscent of a school ground fight breaks out between opposition and ruling coalition MPs.

Georgia is a country in the Caucasus region of Eurasia. Located at the crossroads of Western Asia and Eastern Europe, it is bounded to the west by the Black Sea, to the north by Russia, to the south by Turkey and Armenia, and to the southeast by Azerbaijan. The capital and largest city is Tbilisi. Georgia covers a territory of 69,700 square kilometres (26,911 sq mi), and its population is almost 5 million. Georgia is a unitary, semi-presidential republic, with the government elected through a representative democracy.

The brawl broke out when an argument over the composition of Georgian delegations in international institutions turned violent.
The catalyst for the fight was when opposition member Akaki Bobokhidze’s swore in an address to ruling coalition MPs.
Insults and swear words were traded in reply and then blows, as a mass brawl ‘for all’ developed.

It now appears there is a true ‘connection’ between politics and one’s ability to throw pushes!