Nigerian Military to Sahara Reporters, other Online media on Need for Story Authenticity 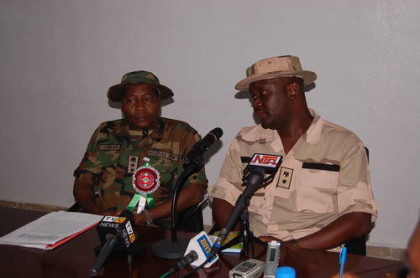 In the bid to effectively prosecute the war on terrorism  in the country, Nigerian Military enjoin all online media to always ascertain the authenticity of all publications, before publishing.
Below is the press release from Nigerian Military concerning certain open letter to President Jonathan by a Military officer

Before Sahara Reporters published their purported document described as petition from Lt Col Wende, a serving Commanding Officer, the Nigerian Army conducted a thorough investigation on the document involving other security and intelligence agencies. The process confirmed that the serving officer was not the author of the petition. Yesterday, the officer dissociated himself from the so-called petition in a press conference he personally attended. While reputable media organizations were on hand to engage the officer, Sahara Reporters being a faceless medium, preferred to remain faceless and was not represented. Sahara Reporters sadly, but predictably, and in fulfilment of its support for terrorism published in its website a fabrication in which it referred to the officer as “unverified”. How absurd!

Sahara Reporters has strived hard to present itself as a propaganda medium for terrorism and Boko Haram in particular. It is with this in mind, that the Nigerian Army conducted a press conference in Maiduguri in which the officer who appeared for the press conference is Lt Col Wende, a serving officer of the Nigerian Army. Since the officer has clearly dissociated himself from the document, it makes sense that the so-called petition is the handiwork of Sahara Reporters. With time, terrorism in Nigeria will be defeated by the collective will of the good people of Nigeria.