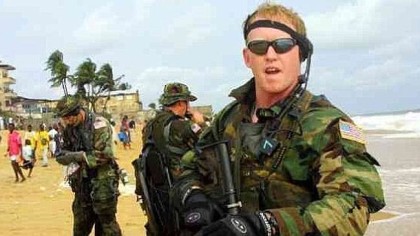 The Navy SEAL who fired the shot that killed Osama bin Laden is a highly decorated veteran of the wars in Iraq and Afghanistan who agonized for months over whether to publicly reveal his role in one of the most storied commando operations in U.S. history.

Robert O’Neill, 38, a Montana native, was near the head of the column of U.S. soldiers that burst into bin Laden’s Pakistan hideout on May 2, 2011.

In a recent interview, O’Neill confirmed to The Washington Post that he fired the fatal shot that struck bin Laden in the forehead. He also acknowledged that shots were fired by at least two other SEAL team members, including Mark Bissonnette, who famously described the raid in the book, “No Easy Day.”

O’Neill was preparing to make his story public next week with interviews on Fox News and in The Washington Post, but his identity was disclosed preemptively by the Web site SOFREP, operated by former SEAL members, in a protest over O’Neill’s decision to reveal his role in the mission.

Over the course of several meetings with The Post, O’Neill said he decided to go public after becoming convinced that his identity was about to be leaked by others. What once was a closely guarded secret had spread widely through military circles, he said, and was known by members of Congress and at least two news organizations.

His impending decision had also fostered anger among colleagues.

In an Oct. 31 letter to the Naval Special Warfare ranks, B.L. Losey, the commanding officer, and M.L. Magaraci, the force master sergeant, emphasized that a “critical tenant” of their profession is to “not advertise the nature of my work nor seek recognition for my action.”

“We do not abide willful or selfish disregard for our core values in return for public notoriety or financial gain,” the letter said.

O’Neill said he confirmed his decision to go public after a private encounter with relatives of victims of the Sept. 11, 2001, attack on New York’s World Trade Center. During an emotional meeting with victims’ family members before the recent opening of the National September 11 Memorial Museum, the former SEAL decided spontaneously to talk about how bin Laden met his end.

“The families told me it helped bring them some closure,” said O’Neill, whose identity as the shooter was independently corroborated for The Post by two SEAL team members.

O’Neill had previously recounted his experiences to journalist Phil Bronstein for a February 2013 Esquire magazine article that, by agreement, referred to him only as “the shooter.” In the piece, he described advancing through bin Laden’s Abbottabad, Pakistan, compound with five other SEALs, eventually reaching the third floor, where bin Laden lived with his wives.

As other team members peeled off to search different rooms, O’Neill found himself in the No. 2 position, behind the point man, for the final assault on bin Laden’s bedroom. When bin Laden briefly appeared at the door, the SEAL at the front of the line fired a shot that apparently missed.

“I rolled past him into the room, just inside the doorway,” O’Neill recalled. “There was bin Laden, standing there. He had his hands on a woman’s shoulders pushing her ahead.”

Though the room was dark, O’Neill could clearly see bin Laden’s features through his night-vision scope.

“In that second, I shot him, two times in the forehead,” O’Neill was quoted in the Esquire article as saying. “Bap! Bap! The second time, as he is going down. He crumbled to the floor in front of his bed and I hit him again.”

O’Neill told The Post that it was clear bin Laden had died instantly, as his skull had been split by the first bullet.

At the time of the raid, O’Neil had served nearly 15 years as a SEAL, eventually earning a spot in the elite unit known as SEAL Team 6. He served in other celebrated missions, including the 2009 rescue of merchant marine Capt. Richard Phillips from pirates off the coast of Somalia, as depicted in the 2013 movie “Captain Phillips.”

While other missions were likely more dangerous, the bin Laden raid was the first in which he believed he would likely be killed, O’Neill told The Post. The SEALs assumed that bin Laden’s compound would be both heavily guarded and booby-trapped to ward off attacks.

“I didn’t think I would survive,” he said.