Police spokesperson, Godffrey Enanga, has said that a maid identified as Tumuhirwe Jolly who was captured on a secret camera tormenting a child was remanded to Luzira prisons after she was charged with torture. 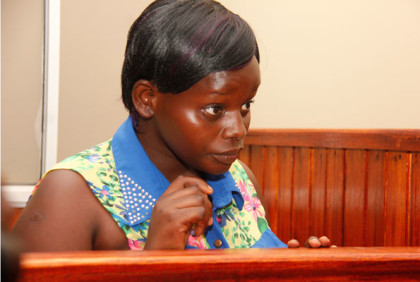 The 22-year-old Jolly Tumuhiirwe in the dock at City Hall Court on Monday. She pleaded guilty to the charges of torture and asked for forgiveness for her actions. Photo by Abubaker Lubowa

The house maid meting violence against a one-and half-year-old baby in Naalya, Wakiso district has been convicted by City Hall Court on her own plea of guilt.
Jolly Tumuhiirwe on Monday pleaded guilty to the charges of torture before asking for forgiveness from court, the parents of baby Arnella Kamanzi (her victim), the nation and all the people who were affected by her actions. She had appeared in court for mention of the case.
However, the trial magistrate, Mr Moses Nabende adjourned the case to Wednesday when he will pronounce an appropriate sentence for the 22-year-old maid after the state prosecutor told court that they did not have all the brief facts of the case.

This was the second time Tumuhiirwe was appearing before court.
Attempted murder
Recently, police announced that the maid would be charged with attempted murder.
However, Ms Jane Akuo Kajuga, the Directorate of Public Prosecutions spokesperson told Daily Monitor that they had not yet amended the charges as her file was still with police.
Ms Kajuga explained that the police have not exhausted investigations and would not rush to amend the charge sheet as more evidence is still being gathered to determine the appropriate charges to prefer against the maid.
Shortly after her conviction, Tumuhiirwe was taken back to Luzira prison where she is currently on remand.
In the video, which was recently circulated on social media, Tumuhiirwe is seen forcefully feeding a baby and torturing her.