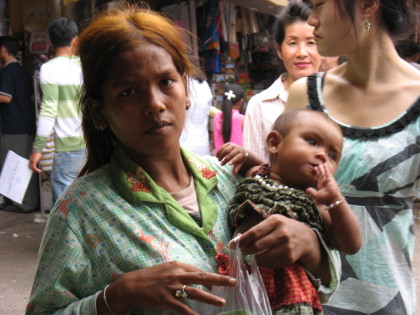 A woman in Cambodia carrying a child for treatment(PHOTO: Internet)

PHNOM PENH, Cambodia – An unlicensed medical practitioner suspected of negligently infecting more than 100 villagers in northwestern Cambodia with the virus that causes AIDS was charged Monday with murder and other crimes, a prosecutor said. Yem Chhrin was charged with murder carried out with cruelty, intentionally spreading HIV — human immunodeficiency virus — and practicing medicine without a license, said Nuon San, a Battambang provincial court prosecutor.

Health officials say 106 people out of more than 800 tested in Roka village were found to have the virus. Cambodian media have reported that the infected villagers range in age from 3 to 82 years old and include Buddhist monks.