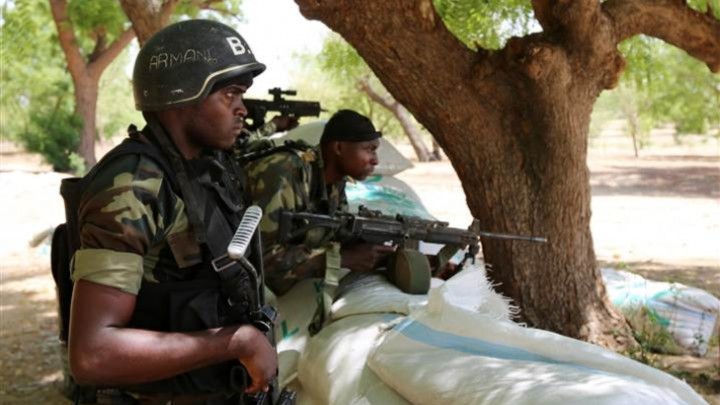 Cameroonian Soldiers in Position at a border town with Nigeria

(Reuters) – Cameroon’s army killed at least 41 Islamist militants as it fought off a wave of attacks along its border with Nigeria over the weekend in an escalation in the conflict, the government said.

The coordinated assaults on five towns and villages showed a change in tactics by Nigerian Boko Haram fighters, who have focused on hit-and-run raids on individual settlements in the past, Information Minister Issa Tchiroma added.

Boko Haram’s campaign to carve out an Islamist caliphate has spread from its stronghold in northeast Nigeria to neighboring Cameroon, raising fears for an already unstable region also threatened by Islamist militants in the Sahel.

Cameroon has sent thousands of soldiers to its Far North region to fight off the militants and said it launched air attacks on the movement for the first time on Sunday.

“Units of the (Boko Haram) group attacked Makari, Amchide, Limani and Achigachia in a change of strategy which consists of distracting Cameroonian troops on different fronts, making them more vulnerable in the face of the mobility and unpredictability of their attacks” Tchiroma said late on Sunday.

At least 34 militants were killed after the army laid siege to a base used by the militants in Chogori, and seven others and one soldier were killed near the town of Waza, he said.

All the militants had now pulled back into Nigeria, Badjeck said.

Both Tchiroma and Badjeck said it was too early to give full details of casualties.

Boko Haram has killed more than 40 soldiers and recruited hundreds of youths during raids in Cameroon’s Far North region this year.

NEWER POSTEuropean Union Observer Mission Has signed a memorandum of with the Fed Govt
OLDER POSTMedia (R)evolutions: Emerging Markets like Nigeria to Lead Sales of Technology Devices in 2015