The Federal Government has described as false, media reports claiming that the Federal Government is denying accreditation to Foreign Journalists to come for the coverage of 2015 General Elections.
In a statement the Permanent Secretary, Federal Ministry of Information Dr. Folasade Yemi-Esan, the Federal Government said so far over 300 applications from Foreign Journalists for Visa to cover the election have been processed.
The statement maintained that those who could not secure visas from Nigerian Embassies abroad probably did not follow due process to secure the accreditation.
While describing the claim of Visa’s denial as deliberate ploy by some politicians to smear Government’s image, it advised Foreign Journalists to follow due process with Official Correspondence from the Organization. The applicants can also apply on line. 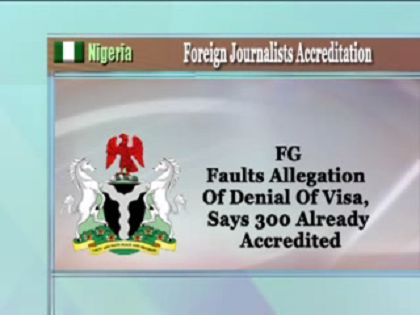