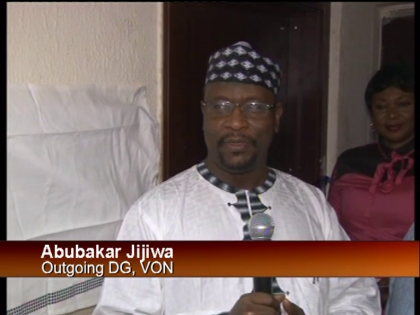 The outgoing Director General of the Voice of Nigeria, Abubakar Jijiwa, has been described as a professional who brought his wealth of experience to bear on the hob.

This was part of the tributes paid to his glowing qualities at a reception held in his honour.

Mallam Abubakar jijiwa whose rain as Director General the  Voice of Nigeria ended on Friday was described as a man who brought positive  change to the organization and his exit will leave a huge vacuum that will be difficult to fill.
They made remarks that eulogized the outgoing director general.

Mallam Abubarkar Jijiwa had earlier commissioned two refurnished studio which were upgraded from analogue to digital and named after late Tunji Oseni and Disu Salawa.

NEWER POSTSamsung Galaxy S6 Reviews for the Nigerian market
OLDER POSTPresident Jonathan Interacts with Youths; Says Electricity will be relatively stable in Nigeria in the next 12-18 months.