Gen. Chris Olukolade Briefings on Military Operations in the North-East 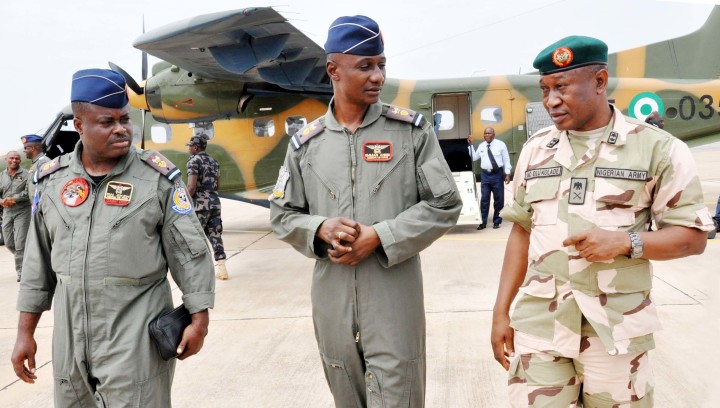 Gentlemen of the press,
This meeting today is not so much about briefing you on the development in the ongoing counter terrorist campaign as it is to express the appreciation of the Nigerian military for the outpouring of love, support and understanding of+good people of this great country to our gallant armed forces. Nevertheless, let me proceed by first of all giving you some update on the nation’s campaign against terror.
You will recall that on Thursday, 26th of February, troops stationed in Mubi and those at Baga got a surprise visit by the Commander-in-Chief of the Armed Forces, President Goodluck Jonathan along with the National Security Adviser , Chief of Defence Staff, Service Chiefs and the Inspector General of Police. That surprise visit, apart from enabling the President and his entourage to have firsthand experience and information on the status of the operation also provided a great lift to the morale of troops generally as the forces consolidate on the current gains. 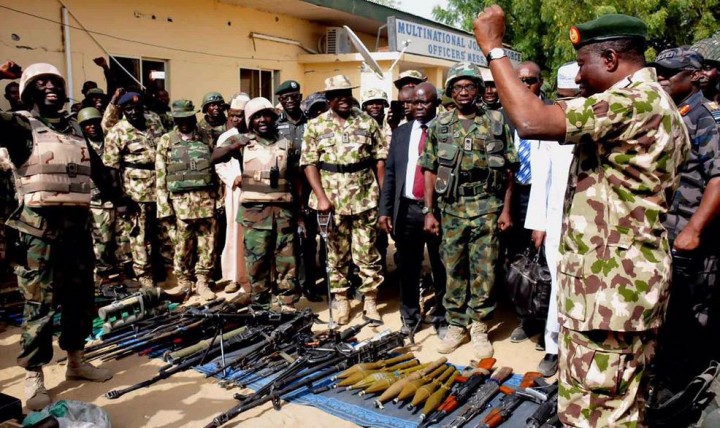 Pres Goodluck Jonathan with the Nigerian Troops in Baga, a Nigeria-Chad Border town

Indeed there is no going back or slowing down anywhere. The air campaigns are continuing with a view to dislodging all the identified terrorist cells, enclaves or hideouts anywhere in the designated mission area. The mandate of working towards ensuring the restoration of normalcy for socio-economic, political and other activities to resume as quickly as possible is being given all it takes toward having the mission accomplished.
So far, so good things are working out in line with the strategic plans. A very significant number of identified terrorists enclaves have already been pounded and destroyed in the course of continuing air strikes. Ground forces are also conducting assaults along with necessary mopping up, cordon and search operations in communities and locations previously occupied by terrorists.
The stage is also set for the conduct of subsequent phases earmarked as part of the campaign. In the process, many communities have been sufficiently cleared to guarantee the return of citizens to their normal lives. The scope is being expanded to ensure that more communities are mopped up and cleansed of every vestige of terrorism. All the towns where the activities of the terrorists are still noticeable will be duly mopped up very soon. 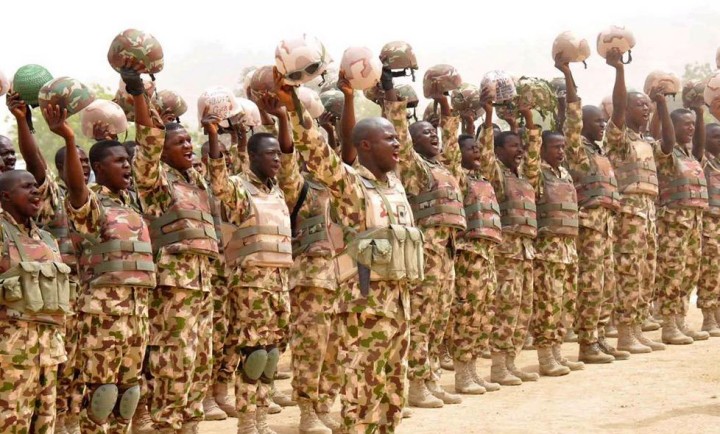 Having provided the above update we wish to use this forum to acknowledge the tremendous show of solidarity and support being expressed by the generality of Nigerian public to the Nigerian military. This gesture of goodwill and understanding in the past weeks has been of tremendous encouragement to all well-wishers of the Armed Forces. Irrespective of the skepticism of ardent critics and cynics in and out of the country, these recent show of solidarity has proved to be a great morale booster. The sight of every segment of the Nigerian society coming out in unison to cheer and celebrate the modest achievement of the nation’s forces is inspiring indeed.
We thank the President and Commander-in-Chief for the confidence he reposes on his troops and for the support and encouragement he has always extended to the military. We thank the cross section of the political class for their kind words of encouragement and equally appreciate the wonderful effort of the media and some civil society groups who organized rallies and marches both in Abuja and Lagos to express support for the military.
However, while these support and show of love are being savored, the attitude and activities of segments of the society who are still hell bent on undermining the morale of our fighting force by deliberately playing down the operational successes so far achieved remains very unfortunate indeed. In a bid to spitefully drown the efforts of our troops, this group of people have been mischievously and exaggeratingly reporting the supportive roles of foreign allies to the detriment of our operational success in the fight against terror. They go to every extent to ridicule, taunt or project every falsehood, purely to score some points in the clandestine sympathy for the terrorists. This unpatriotic posture is directly or indirectly undermining the esteemed status of Nigeria in the comity of nations. 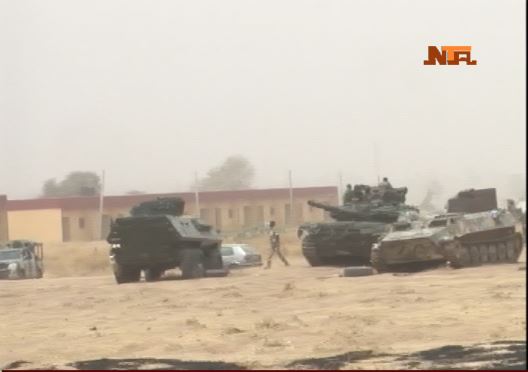 Nigerian Mechanized Division on the front-lines in the North-East

The need has therefore arisen for a call on the media to beware of the mischief and conspiracy by some theorists who are still bent on orchestrating a well-rehearsed smear campaign against the Nigerian military. They have been struggling to attribute the recent defeats inflicted on the terrorists to the invincibility of other forces or military outfits other than Nigeria’s.
The truth of the matter is that the current turn of the tide against the terrorists is an initiative conceived and is being driven by the Nigerian military but enjoying the backing of the reinvigorated Multi National Joint Task Force (MNJTF), which has troops from Niger, Chad and Cameroon.
The continuous aerial bombardment of identified terrorists’ cells and hideouts by the Nigerian Air Force and subsequent ground offensive by the Nigerian troops pursuing the dislodged terrorists is proving worthwhile. Our partners are entrusted with employing the instrumentality of the Multi-National Joint Task Force to contain any terrorists who heads towards our borders with neighbouring countries and preventing the formation of any new safe haven elsewhere. 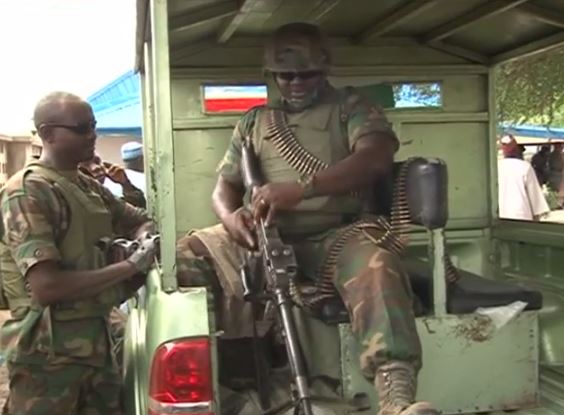 Nigerian Soldier with a machine-gun stationed in the North-East

The forces have been working very hard in consonance with the terms and spirit of the Memorandum of Understanding that preceded this operation. They are effectively checkmating trans-border activities of the terrorists. There have been instances where these provisions for the operation of the MNJTF has afforded our partners the latitude required to pursue or beat back a retreating band of terrorists into Nigerian territory as was the case in Gamboru and other locations not far from the border.
Unfortunately, some interest groups who seek to misinterpret this fruitful collaboration are seeking to drive a wedge between the Nigerian military and her supporting military formations or contingent by deliberately trying to denigrate and ridicule the effort of the Nigerian forces.
If other militaries who have just joined the war against the terrorists would be described in some warped reports as “battle-hardened”, how would any sensible commentator or reporter describe the gallant Nigerian forces who have been battling these mercenary-ridden terrorists for over five years now say?
The antics of some foreign media and their local collaborators who will stop at nothing to bring the Nigerian military to disrepute is no longer new or unusual. The Nigerian military will not be distracted or detracted from the current momentum which is geared towards stamping out terrorism not only in Nigeria but in the entire sub-region.
It is of necessity therefore to reiterate that much as we value and appreciate the ongoing collaborative effort of the troop contributing nations of the Multi National Joint Task Force (MNJTF), there has been no compromise of any aspect of Nigeria’s sovereignty or soil to any foreign force. This counter terrorist operation is comprehensively driven by Nigerian forces. Other members of the MNJTF have so far successfully denied the common enemy freedom of trans-border operations and this is in consonance with the idea of the multinational coalition initiated as far back as 1998.

Be that as it may, we are conscious that the fight is not over and the Nigerian military will therefore not relent. Nothing will be taken for granted. All Nigerians are equally enjoined to maintain this posture. We must at all-times remain vigilant and conscious of our environment and be on the lookout for unrepentant terrorists, their collaborators or sympathizers who will stop at nothing in their resolve to destroy our country and civilisation.
Ladies and gentlemen, the invaluable partnership and collaboration of the media in this whole war against terror is well appreciated. We say thank you for your understanding and support so far. As the fourth estate of the realm, your ideal role as purveyors of truth makes you a key partner in protecting our national security. On our part, we will continue to provide necessary assistance to enable you carry out your job in terms of information dissemination on the ongoing war against terror.
Please note that there has not been an outright denial of access as propagated in some quarters. Rather, the exigency of the current operation has necessitated some arrangement. You will recall that we have conducting periodic media visits and tours of the mission area in addition to the activities of the local media close to locations who have also been reporting unhindered. We urge you to show understanding of the peculiar nature of this war as we are more concerned about your safety than any other consideration. In the interim, please continue to make use of the official channel of accessing information until it is safe enough for you to seamlessly source information in the affected areas.
Finally, just as the Chief of Defence Staff has reiterated often, it is worthy of note that, when the country is at war, it is not only the military that should be involved but every segment of the society. We believe that together, we shall certainly defeat the forces of darkness that strive to destroy our country.
Thank you and God bless Nigeria
Original Post from DHQ