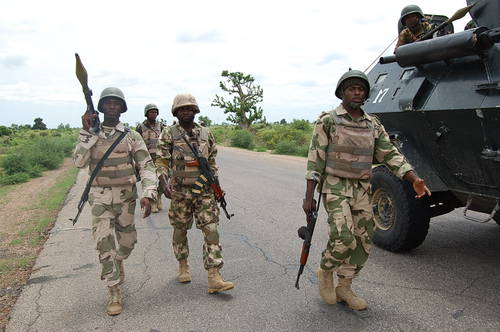 According to reports from Defence Headquarters today, Two journalists working for Al Jazeera  Television  who were found to have been loitering around areas where military operations are ongoing  in the North East have been  restrained in Maiduguri.

The journalists, Ahmed Idris and Mustafa Andy who were noted to have been moving around various locations including restricted areas in Yobe and Borno  State were also operating  without any protection , accreditation or due clearance.

“They were accordingly monitored by military  intelligence operatives until they eventually had to be restrained to their hotel in Maiduguri. This followed  the increasing suspicion that their activities were aimed at interfering with the  ongoing military operations in the area.” The report states.

“The motive , activities and some material in possession  of these individuals are now being investigated.”

DHQ further states “It will be recalled that Foreign journalists have earlier been cautioned  against unauthorised and unprotected  movements around the military  operations area. This warning is  hereby reiterated until formally  reversed or lifted. Appropriate arrangements will however continue to be made to assist duly cleared journalists to cover activities in the mission area within the limits of adequate safety, security & necessary procedures.”

We demand the release of our two journalists detained in Maiduguri by Nigerian forces. http://t.co/O7asAnGIlz pic.twitter.com/padHutoTrZ