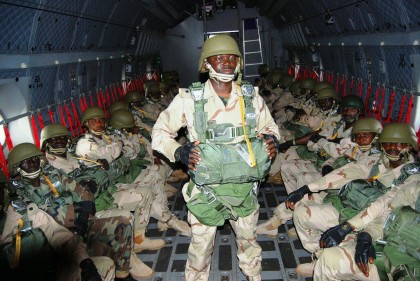 Speaking at an interactive session with journalists after talks with President Issoufou Mahamadou of Niger, President Buhari declared that the Nigerian Army which has earned a good reputation across the world, remains a virile fighting force.

“I am four days in office today and we have already started the process of ending the insurgency,” the President said.

He disclosed that in the course of the over five hours meeting he held with heads of Nigeria’s Armed Forces and Security Agencies yesterday, on-going operations against Boko Haram were reviewed for better results.

President Buhari said that because of the peculiarities of terrorism, the movement of terrorists across borders and the unconventional nature of the war against terror, Nigeria will continue to seek the support of neighbouring countries in its bid to overcome Boko Haram.

The President said that his visit to Niger was to seek more support from the country in bringing a quick end to the atrocities of Boko Haram.

President Buhari said he would hold similar meetings on security and the war against terrorism with the Chadian authorities after leaving Niamey on Thursday.

The President said Nigeria would also require the assistance of other nations and multi-lateral institutions to rebuild areas that have been adversely affected by the Boko Haram insurgency and rehabilitate displaced persons.

In his remarks, the President of Niger commended President Buhari for making Niger the first country he will visit after his inauguration.

“Your decision to move the military command of Nigeria to the North East has further strengthened our conviction that the war against terrorism will soon come to an end,” he told President Buhari, while assuring him that Niger will continue to support Nigeria in the fight against Boko Haram.

At the opening of bilateral talks between Nigeria and Niger earlier, President Buhari praised his hosts’ contributions to the on-going multi-national effort against terrorism, insurgency and cross-border crimes.

“Permit me also to acknowledge the consistency with which the government and people of Niger Republic have stood beside Nigeria under all circumstances. I would like to convey the appreciation of Nigeria for the sacrifices by Niger in the on-going efforts to counter the menace of the Boko Haram insurgency.

“Niger Republic has over the years, proven to be a reliable ally to Nigeria both at bilateral and multilateral levels. It is our hope and aspiration that this special relationship would be further consolidated during my administration.

“My administration will bring new impetus and a renewed commitment to the efforts to wipe out the menace of the Boko Haram insurgents. As a first step, we have directed the relocation of the command post of the counter-insurgency operations to Maiduguri until such a time that the insurgency is completely defeated.

“Another issue of concern to us which is closely associated with the insurgency in the region is the influx of refugees and other displaced persons. We are aware that currently, there are over one hundred and fifty thousand displaced persons comprising refugees and returnees taking refuge in various parts of Niger.

“Our administration will work closely with governments of the affected States to continue to provide humanitarian assistance to the displaced persons and their host communities.

“The ultimate objective however, remains to end the insurgency and facilitate their return to their homes,” President Buhari said.