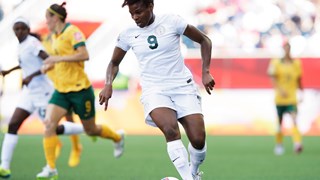 Australia(rank 10) beat Nigeria(rank 33) 2-0 courtesy of Kyah Simon’s brace, which gives the Matildas three valuable points in their quest to reach the Round of 16 at the FIFA Women’s World Cup™.

With warmer temperatures in Winnipeg than the two teams experienced on Monday, the opening stages of the Group D contest lacked any real pace or scoring opportunities. Desire Oparanozie looked dangerous for Nigeria up front but her final touch was off the mark on a few occasions in the first ten minutes.

Almost half-an-hour in, Australia captain Lisa De Vanna made a driving run through the heart of the Nigerian defence before passing off to Kyah Simon, who lifted the ball over Precious Dede and into the net to give the Matildas the lead. Nigeria were put on the back foot after Australia’s opener, and it was nearly 2-0 but Simon’s first effort was blocked and De Vanna’s volley from the rebound fired just wide.

The Super Falcons then began to threaten at the other end, but Australia goalkeeper Lydia Williams stymied Oparanozie at the edge of the box with a great sliding challenge to take the ball straight off the No9’s foot. Seconds later, Ngozi Okobi attempted an ambitious volley from long-range, which drew a gasp from the fans, but her effort sailed high.

The Matildas doubled their lead with Simon scoring her second after Samantha Kerr floated in a lofted cross that found her and Tameka Butt unmarked. Simon was in a better position to put it past Dede, which she did comfortably. Laura Alleway was denied by the crossbar in the final minutes, and the Matildas never looked troubled at the other end of the pitch as they held on to keep the clean sheet intact for Williams.

Nigeria face a difficult task as they realistically need victory against USA to progress to the knockout stages, while an exciting match in prospect awaits the Edmonton crowd, when the Matildas face Sweden on Tuesday.