Why the USA Is So Strong in Women’s Football 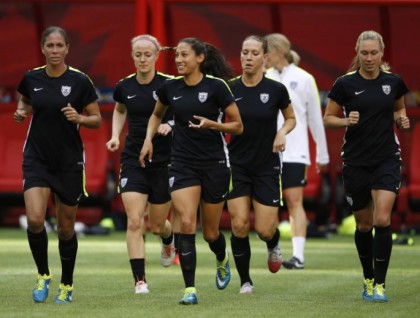 United States Sunday will likely win(leading 5-2 after 75′ of play) its third Women’s World Cup and extend a quarter-century run of dominance in women’s soccer.

The national team has never finished worse than third in the competition and has consistently ranked near the top of the worldwide rankings since FIFA started keeping such records in 2003. Four Olympic gold medals in five tries adds to the Americans’ haul. Victory is normal. Losses are rare — and painful.

So, the obvious question is: Why are we so good at women’s soccer? And it’s especially notable considering the U.S. men’s soccer team didn’t even crack the top-10 ranking until 2005, and has since plummeted to 27th.

Experts say the U.S. wouldn’t be the powerhouse it is today without Title IX — the law that prohibits discrimination on the basis of sex in federally funded education programs and activities.

“Before Title IX, girls and women didn’t really have that many opportunities to play sports. Athletic scholarships were non-existent,” said Neena Chaudhry, director of equal opportunities in athletics at the non-profit National Women’s Law Center.

“There’s no question in my mind that what we’re seeing in terms of our women’s soccer team and our other pro-female athletes is due in great part to Title IX.”

Title IX was passed in 1972, but it wasn’t until years later that the U.S. Soccer Federation debuted its first Women’s National Soccer Team: A ragtag group of female athletes cobbled together in less than a week with virtually no budget, no time to practice, and no uniforms. They played in an international tournament in the summer of 1985.

“The day before the team was supposed to leave, they got all these boxes of shorts and shirts and sweats, and they were in men’s sizes. So the team members stayed up into the night, sewing, taking in these clothes, so they would have something to wear,” said Karen Blumenthal, author of “Let Me Play: The Story of Title IX.”

Despite all odds — the women had scraped together about $10 a day each for meals during the tournament, Blumenthal said — the team tied Denmark 2-2.

In the following years, a new generation of American female athletes, bolstered by Title IX opportunities, grew up on the soccer fields that their mothers hadn’t been invited to play on and thrived. Sunday night’s match marks the fourth U.S. women’s World Cup soccer final since 1991. 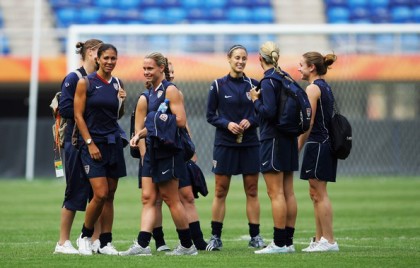 Love affair born in 1999
Soccer is one of the most popular sports among girls, Chaudhry said, and its popularity blossomed after U.S. women won the World Cup in 1999.

Katy Hardt, 22, who lives in San Francisco, has played soccer since she was little. She remembers the U.S. women’s 1999 win and the impact it had on her, “especially the moment where Brandi Chastain ripped off her shirt in triumph,” she said. “I had a poster of that in my bedroom.”

Hardt grew up to be captain of her college soccer team, having been raised watching Chastain, Mia Hamm and other female soccer stars.

“I definitely idolized them,” she said.

Those stars were a product of their era, said Blumenthal.

“The fact that these women all started playing very young reflects the changes that Title IX brought about,” she said. “All this money was being spent on sports for boys and men, and in many cases, zero was being spent for women, or a tenth as much.”

But soccer isn’t terribly expensive, Blumenthal said, so as schools and sports programs transitioned over the years to comply with Title IX, soccer was an easy sport to let girls in on.

“And also, it was just becoming very popular among families, small kids. So soccer became a sport for a lot of girls to play,” she said.

The changes followed the players throughout their sports careers.

“If they had been born 20 years earlier, for instance, there wouldn’t have been college scholarships at all. For the most part, they didn’t exist at all. There were scholarships for men, and in many large universities, no scholarships for women, until the early 1980s, even though Title IX was passed in ’72,” Blumenthal added. 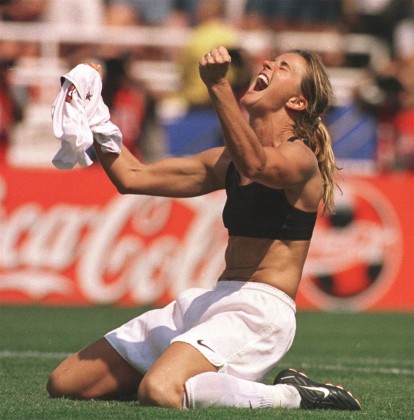 Why is the world lagging behind?
Stefan Szymanski, a University of Michigan professor of sport management and author of the book “Money and Soccer: A Soccernomics Guide,” points out that while the U.S. Women’s National Team thrived on Title IX opportunities, in many cases, the global competition just doesn’t exist.

In England, for example, women’s soccer was banned by the national governing body from the 1920s until around 1970, he said. The Brits’ appearance in the World Cup semifinals Wednesday — a heartbreaking loss to Japan — was considered a pleasant surprise in a nation that has had an organized men’s football association since 1863.

“English women had no organization behind them. This problem is slowly being overcome, but the legacy is damaging,” Szymanski said. Many other countries in Europe are still lagging in the women’s movement, and even in Brazil, where soccer is a cultural phenomenon, “women have struggled to gain recognition and access to basic resources.”

Successful, not equal
Experts are quick to point out that, in spite of great success in competition, the U.S. still has a long way to go in gender equity in sports.

“Pay for women is pathetic relative to men,” Blumenthal said. And that extends to college scholarships: “Football players tend to go to college on full scholarships, and women’s sports, they tend to take the women’s scholarships and divide them up and spread them around,” she said.

The National Women’s Law Center’s Chaudhry has done research on Title IX violations in each state. Georgia ranks worst, she said, with large gender equity gaps at more than two-thirds of high schools.

“We still hear regularly from parents and students across the country about girls not getting to play sports that they want to play, about girls’ teams playing on inferior fields and in inferior facilities. This is something that is all too common,” she said.

That’s visible even at the 2015 Women’s World Cup, which is being played on artificial turf — blamed for more injuries than the grass that men play on.

“Even at this level, where our women are playing in the final and they’re at the most elite level that they can get to, that they’re still facing this kind of inequality, it speaks volumes about the work that we still have to do as a country,” Chaudhry said.