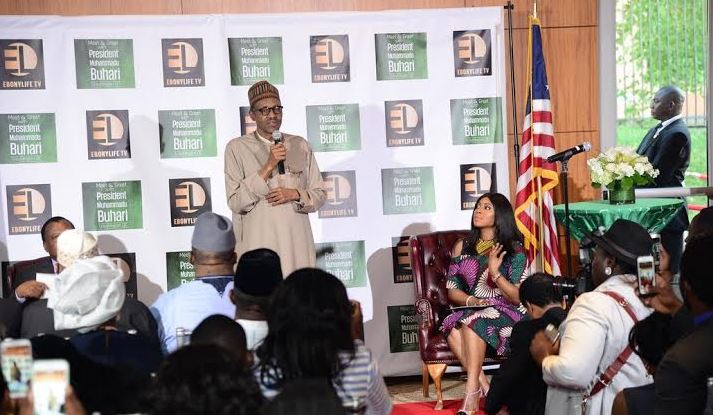 President Buhari’s meeting with Nigerian People in the USA

President Muhammadu Buhari on Wednesday said that he would work very hard to sustain the current goodwill his government had received at home and abroad.

The President, who was reacting to a question after his address at the United States Institute for Peace, in Washington DC on how he intended to leverage on the enormous goodwill being enjoyed by his administration and meet the huge expectations of the people, said despite his perceived slowness and the reality of lack of resources, he would work very hard “so that people will see and believe that we are trying and can deliver and hopefully become less critical.”
President Buhari, while acknowledging the huge challenges confronting his administration such as the crash in the price of crude oil, its theft, pipeline vandalisation in the Niger Delta, hostage taking and insecurity in the North East, restated his determination to sustain the goodwill by working very hard. “And I believe I will succeed,” he declared emphatically.
In his main speech to the distinguished audience, the President also reaffirmed that, “despite our current challenges, Nigeria’s commitment to good governance, anti-corruption, democracy and security of lives and property remains firm. Similarly, I must reaffirm that despite the current challenges that we face domestically, we are ready and willing to face our duties…​Fixing Nigeria’s problems as formidable as they are is the responsibility of Nigerians.  The international community can only assist, but the hard work belongs to Nigerians and their government.  I will as President, lead from the front, but all Nigerians, including the opposition parties, civil society, business and religious leaders, public servants, labour unions, the youth and professional associations all have important roles to play to get our country back on a sound economic footing.”
On the required external support in the anti-insurgency and terrorism campaign, he expressed regret that, “the blanket application of the Leahy Law by the United States on the grounds of unproven allegations of human rights violations levelled against our forces has denied us access to appropriate strategic weapons to prosecute the war against the insurgents.” He noted that in “the face of abduction of innocent school girls from their hostels, indiscriminate bombings of civilians in markets and places of worship, our forces have remained largely impotent because they do not possess the appropriate weapons and technology which they could have had, had the so called human rights violations not been an obstacle.”
According to President Buhari, “​Unwittingly, and I dare say, unintentionally, the application of the Leahy law amendment by the U. S. Government has aided and abated the Boko Haram terrorist group in the prosecution of its extremist ideology and hate, the indiscriminate killings and maiming of civilians, in raping of women and girls, and in their other heinous crimes. I believe this is not the spirit of the Leahy Laws. I know the American people cannot support any group engaged in these crimes. ​I therefore strongly appeal to both the Executive Arm and the US Congress to examine how the US Government can provide us with far more substantial counter-terrorism assistance with minimal strings. The longer we delay, the deadlier the Boko Haram gets. At all events, we have re-written the rules of engagement protecting the rights of combatants and in particular safeguarding civilians in theatres of conflict.”
Before the President’s address at the last programme of his four-day visit, the former United States Secretary of State for African Affairs, Ambassador Johnnie Carson, who moderated the interactive session, had described President Buhari as a “very humble and strong personality with enormous integrity and commitment to good governance and uplifting the lives of the citizenry.”
GARBA SHEHU
Senior Special Assistant to the President
(Media & Publicity)
July 22, 2015.

NEWER POSTFull Speech of President Buhari at the US Institute of Peace, Washington DC, Wednesday, July 22, 2015
OLDER POSTPresident Buhari Resolves to Continue With Privatisation Programme in Critical Sectors of The Economy