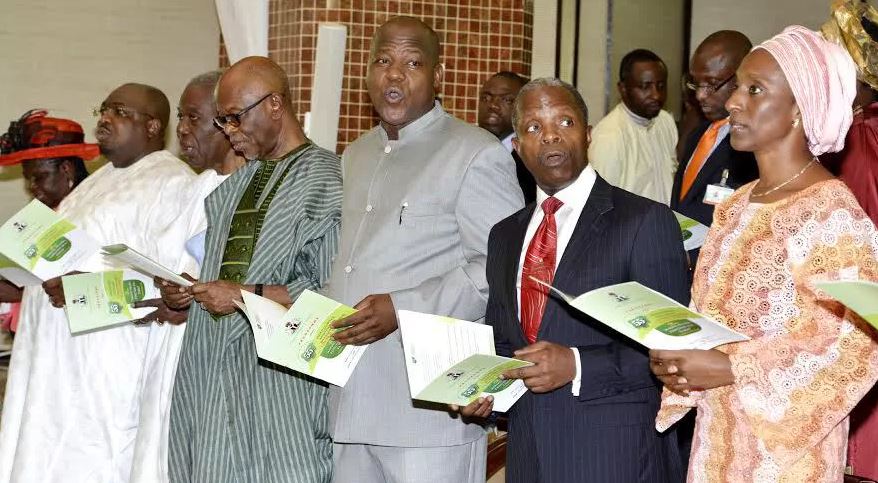 Terrorist bombs never ask the question about the religious persuasion of its victims or their ethnic origins, before causing havoc and destruction, according to Vice President, Prof. Yemi Osinbajo, SAN.

The Vice President spoke today at the church service marking the country’s 55th Independence Day coming up later in the week on October 1.

“I have travelled the length and breadth of this nation, especially in the Northeastern parts in the last few months and I have seen children, women, men who were bomb victims. I have seen the dead, the wounded, the sick.

Continuing he said “ the truth of the matter is that the bulk of all those that I have seen, there were Moslems, there were Christians, there were those who professed no particular faith, but were all Nigerians, and one thing that united them was that they were all poor, and in IDP camps” Prof. Osinbajo recalled asking Nigerians to stand together against terrorism and poverty.

He added that “when a bomb goes off in Potiskum or in a market in Maiduguri or Gombe, it does not ask if you are a Christian or a Muslim, it does not. It never asks if you are Yoruba or Ibo, or Hausa.”

The Vice President urged religious and political leaders to emphasize only what unites the people of Nigeria not what divides them. According to him leaders “must understand that the terrorism is not a contest between Christians and Muslims, it goes well beyond that. It is our duty not to pursue narratives that divide us. It is our duty to do everything that unites us. We must ensure that we don’t create further divisions, but that we bind together those divisions, that is our duty.”

He lamented that Nigeria has been divided against ethnic and religious lines for far too long, calling for a time of unity. “That unity is so crucial, so important. It is all that will make a difference in the next few years,“ he stated.

One of Nigeria’s major problems, he argued is that “we would play politics with everything, but the fate of over 110 million extremely poor Nigerians have not been the central concern of anyone.” He said it is the fate of those vast majority of Nigerians who are poor that should be our concern as a people.

He also expressed deepest condolences to the families of Nigerians who lost their lives in the Mecca stampede tragedy praying that God will comfort them, and their communities.

Praying that at 55, Nigeria will experience double grace, since number five stands for grace, the Vice President also wished Nigerians a time of double favor in their personal lives.