Arowobusoye SamuelOctober 8, 2015 6:48 pm 0
Until there is stability in the power sector, electricity tariffs cannot remain at the levels they are currently, according to Vice President Prof. Yemi Osinbajo, SAN.
Speaking yesterday afternoon at the Annual General Meeting of the Manufacturers Association of Nigeria, MAN, the Vice President who represented President Muhammadu Buhari as the Special Guest of Honor said truth of the matter regarding electricity tariffs is that “at this point, if we wanted to have a cost effective tariff, the only way is to service that core value chain, the only way is to ensure that we are paying and compensating the value chain -from generation down to distribution- a cost effective tariff.” 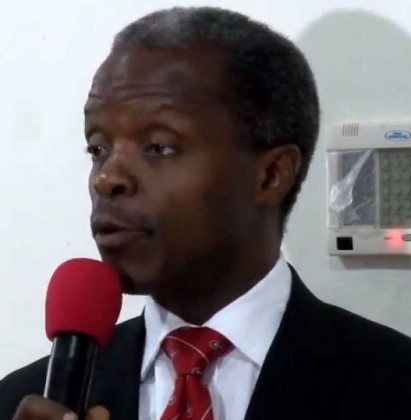 In a similar vein, the Vice President also made it clear at the meeting that a review of the CBN restrictions on foreign currency is not imminent.

His words:  “I want to make it absolutely clear that the position is not that a review of the CBN restrictions on foreign exchange is imminent. It is a short term measure, not a policy, and as things improve, we will have a discussion about what to do. But certainly not that a review is about to take place.”
He spoke more on the electricity tariffs and his comments are hereby reproduced verbatim:
“Power is of course crucial and as the president said in his inaugural address, to which President Mbeki referred, the question of power is one that is absolutely crucial to manufacturing and practically everything else and we shouldn’t be rejoicing at 4000 Megawatts of power. But the problems are historical and several of those problems will need tackling head on, on a day-by-day basis.
“One aspect of the problem that I want to speak about, because this also affects manufacturing, is the whole idea of the tariffs. Of course the president of MAN just said that we have one of the most expensive electricity in the world.
“Now, the truth of the matter is that at this point, if we wanted to have a cost effective tariff, the only way is to service that core value chain, the only way is to ensure that we are paying and compensating the value chain -from generation down to distribution- a cost effective tariff.
You cannot have that cost effective tariff without some pay.  At the moment, (when you compare) how much it costs to produce power, and the amount of power that is generated, the losses on account of distribution are significant. In some cases you have up to 40% losses in distribution, and of course it is the DisCos that have to take that burden.
“The GenCos (generating companies) are producing power but they expect to be paid for all the power that they produce. Now, if 40% of this is lost, it means the DisCos cannot collect 40%, but they have to pay for it somehow. So government has to come in and play some kind of role in order to ensure that the whole value chain is paid for.
“But the most important thing is that the cost of power is reflective of costs that have to be borrowed at every stage of the value chain and today the cost of power, if it’s going to be reflective in any way is simply what it is. It will be very difficult indeed, except if we are going introduce yet another subsidy and by the way, a fair amount of that goes on already in the way that government supports the GenCos and the DisCos.
“But i think that we must be ready to accept that for a while, until things stabilize somewhat, tariffs cannot remain at the levels at which they are today, they cannot remain at that level, and that just simply is the truth of the matter.
“It certainly means that there may be higher costs, but I don’t think that a option of not having power is really what we want. The real issue of course is that at the end of the day, some of the cost goes to the consumer, but a cost reflective tariff is an absolute necessity, otherwise, privatization and all of that simply doesn’t make sense. “
Laolu Akande
Senior Special Assistant-Media & Publicity
Office of the Vice President