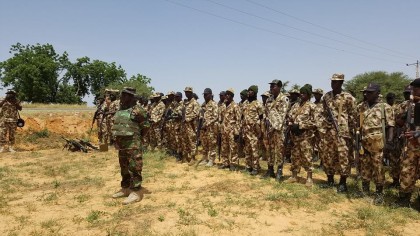 The attack was successfully repelled by the troops and the reinforcement sent. The troops killed most of the attacking terrorists and destroying their weapons and equipment.

However and regretfully too, we lost 3 soldiers and some equipment during the encounter.

The Chief of Army Staff (COAS), Lieutenant General Tukur Yusufu Buratai who was on operational visit to North East, personally visited the troops location, assessed the damage done. He warned the officers of the unit that such ugly incident should not be allowed to happen again.

The COAS also drove into the town and further assessed damage by the terrorists and gave further directives to the troops for the defence and improved security of the general area. He also met with some of the community leaders and Idris Aloma Polytechnic staff where he assure them of their safety and improved security.

The situation in Geidam is now calm and people are going about their normal businesses. 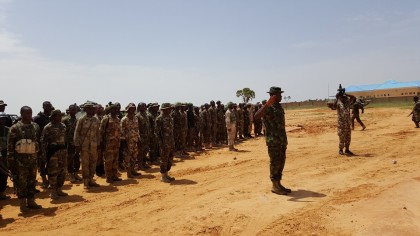 The COAS was accompanied on the visit by the Theatre Commander Operation Lafiya Dole, Major General Yusha’u Abubakar, the Chief of Training and Operations (Army), Major General Fatai Alli, as well as Acting Director of Military Intelligence, Acting Provost Marshall and Director of Campaign Planning, as well as the Acting Director Army Public Relations and the Liaison Officer of the Multinational Joint Taskforce.

The Nigerian Army wishes to assure the public that this isolated incident would not be allowed to repeat itself. We reaffirm our determination and commitment to route out the Boko Haram terrorists in all their enclaves before the end of this year.

The Chief of Army has continued his operational visit to other formations and units within the theater of war against the Boko Haram terrorists.