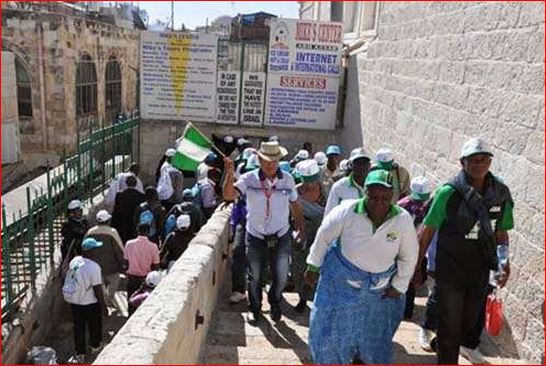 The Central Bank of Nigeria (CBN) said it has approved maximum purchase of 1,000 dollars as Personal Travel Allowance (PTA) at an exchange rate of N160 per dollar to Christian pilgrims.

The bank disclosed this in a circular to all authorised dealers and the public from its Trade and Exchange Department which was posted on its website on Thursday.

The CBN said the Federal Government approved a maximum purchase of 1, 000 dollars PTA to each pilgrim in respect of the 2015 Christian pilgrimage to Israel, Rome or Greece.

It said that the Federal Government had approved the purchase of a maximum at a concessionary exchange rate of N160 to the dollar by each intending pilgrim.

It also said that the Chairman or Secretary of each state pilgrim’s board would be allowed to sign and collect the PTA on behalf of the intending pilgrims.

The bank said that this would only be after due identification such as presentation of the approval list and valid passports of the pilgrims listed against the state.

“No pilgrim should be denied the travel allowance on the ground that he/she has no Tax Clearance Certificate.

“In view of the time constraint associated with the pilgrimage, the chairman or the secretary of each state pilgrims’ board after due identification, may be allowed to sign for and collect the PTA.

“This is on the behalf of the intending pilgrim in each state on presentation of the approval list and valid passports of the pilgrims listed against the state.

“In accordance with Israeli and Italian Governments’ policies, visa shall only be issued to the pilgrims at the point of entry, that is, at Ben Gurion Airport, Tel Aviv, Israel and Fumichino Airport, Rome, Italy, on arrival.

It added that the air tickets and visa requirements for the purpose of procuring the stipulated PTA had been waived.

The bank, however, added that an endorsed copy of each pilgrim’s passport should be retained by bank for record purposes.