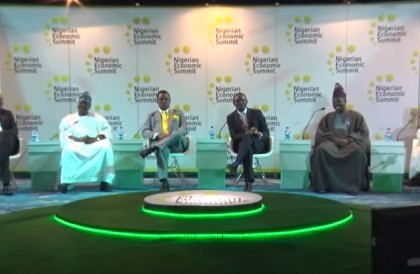 Some governors from the South-West, South- East and South -South, have pledged to explore areas of their competitive advantages in the zones to achieve economic growth and development.

The governors made the pledge at the on-going 21st National Economic Summit (NES) during a Plenary Session on “ Sub-national competitiveness towards economic growth: A conversation with state governors’’.

The governors also discussed measures to increase the contribution of each region to national output.

They also set economic agenda and leveraged on each geo-political zone’s competence to achieve inclusive economic growth and sustainability.

Moderator of the session, Mr Frank Aigbogun, BusinessDay Publisher, said each of Nigeria’s six geo-political regions was unique in terms of human and natural endowment .

Aigbogun said the states were unique and remained vital in Nigeria’s journey to become a global competitive economy.

“Over the years, while some geo-political zones have made progress in delivering basic amenities to their populace, others continue to grapple with basic socio-economic challenge, which have fostered uneven development across the geo-political zones.

“For Nigeria to be competitive, each geo-political zone must be equipped to respond to key challenges such as insecurity, youth unemployment, infrastructure and housing deficit.

“Also, the issues of internal revenue generation and accountability of government must be given adequate attention,’’ Aigbogun said.

Gov. Willie Obiano of Anambra said his administration had focused on four pillars of agriculture; oil and gas; trade and commerce and industrialisation to achieve economic growth.

Obiano said that agriculture sector had been revived in the state and that it had employed over 250 youths while over 150,000 youths had also been employed under trade and commerce initiatives.

According to him, the government has increased rice production from 80,000 metric tonnes per annum to 200,000.

“This is possible through public and private participation sector in rice production.’’

He said that the government target was for the state to produce about 15 to 20 per cent of the total rice consumption of Nigeria in few years.

He added that he was already working with the Enugu State Government on how the region could develop coal.

Similarly, Gov. Abiola Ajimobi of Oyo State said that his administration was working on taking the advantage of having the largest land mass within its zone and largest research institutes to boost its development.

He said the administration had improved on agriculture and that the state was the highest producer of cassava.

Ajimobi said that the administration introduced mechanised farming and inclusive farming to boost agriculture in the state.

He added that the state was incorporating the ideas and experiences that led to the development of its neighbouring states to fast track the state development.

Gov. Rochas Okorocha of Imo said his administration focused on education, security and agriculture and pledged to improve on health care delivery.

Okorocha also stressed the need to decentralise the economy rather than depending on the Federal Government.

He said that communities should also play key roles in economic development.

He also urged the Federal Government to allow the state to venture into gas refinery, saying if that was done, he might not be coming to Abuja for money.

Also, Gov. Ibikunle Amosun of Ogun, said education was key in his administration had built 15 out of 30 world class model schools across the state.

He added that agriculture had been repositioned to make farming attractive for the youth in the states.

In addition, Gov. Adams Oshiomole of Edo said his administration had embarked on tax reforms and increased locally generated revenue.

“We have also developed the education sector and we have a law that says every child in the state must go to school. It is not about going to school but about giving the students best education,’’ he said.

Oshiomole added that the government was working to make Edo power generation hub, while it was also attracting a number of foreign investors into its rural-investment approach.

The session also focused on creating an understanding of the complementary role businesses played in implementing the Sustainable Development Goals.

The theme of the summit is: “Tough choices; Achieving competitiveness, inclusive growth and sustainability.’’