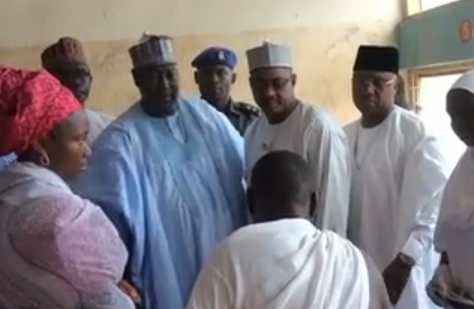 The number of dead persons resulting from the bomb blast has risen to 33 as at the time of this report, while the injured are responding to treatment

The presidential delegation led by Secretary to The government of the federation, Babachir David Lawal visited the injured at the Yola Specialist hospital and the Federal Medical Center, Yola where they commiserated with them.
Accompanied by Governor Muhammad Umar Jubrilla, the SGF asked them to take the incident as the act of God, stressing that government is committed to ensuring safety of lives and properties at all cost.

Both the medical directors of FMC Yola and Specialist hospital said the victims are responding to treatment as they are now in stable condition.

The SGF also visited the palace of Lamido Adamawa Dr. Muhammadu Barkindo Aliyu Mustafa where he delivered President Muhammadu Buhari’s condolence message to the government and people of Adamawa state.

Governor Muhammad Umar Jubrilla and Lamido Adamawa Dr. Mohammadu Barkindo Aliyu Mustafa thanked the delegation for the condolence visit saying their should be enlightenment on the need for people to be more security conscious.