AIG Zone 7 Cautions Personnel On Their Conduct While Discharging Duties 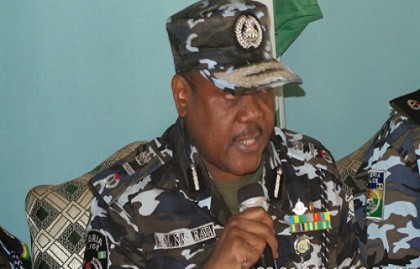 Assistant Inspector General of Police in charge of zone seven Ballah Magaji Nasarawa has charged men and officers of the zone to conduct themselves in line with the dictates of the inspector general of police Solomon Arase.

Ballah Magaji Nasarawa stated this when he visited the Niger state command. The Assistant Inspector General was quick to also remind them on the need to be extra careful in the use of firearms.

On discipline he said the order dismantling road blocks is still on and no police should be found violating the order. Unauthorized posting of personnel as well as illegal duties are frowned at.

The AIG was also at the Abuja command of the federal capital territory.

Where he restated the Inspector General’s commitment to ensure that welfare of personnel in the area of accommodation and promotion.

Ballah Magaji Nasarawa was also emphatic about the need for the rank and file of the police to ensure that they do not engage in any negative practices as the Nigeria police brace up to commence recruitment as directed by president Muhammad Buhari.