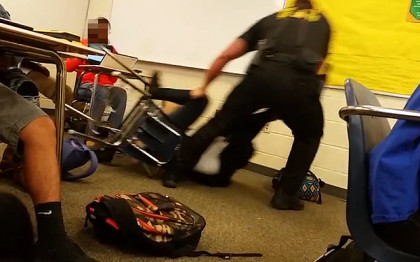 A white Sheriff deputy who dragged a black South Carolina high school student to the ground during a classroom arrest became a point of national discussion and the focus of a federal probe on Tuesday, as civil rights groups call  for his sack and charge for assault.

Officer Ben Fields, 34, who has already been suspended without pay after videos filmed by students showed him flipping and dragging a 16-year-old girl out of her chair across a classroom for refusing to put away her cell phone.

The Federal Bureau of Investigation and Justice Department launched a civil rights probe to determine if federal laws were broken, as the president of the South Carolina chapter of the National Association for the Advancement of Colored People called for Fields to be charged with assault.

The incident comes at a time when the use of force by police, particularly against blacks is highly scrutinized. Richland County Sheriff Leon Lott said he did not know if race was a factor in the case.

The student, who was not identified, was not injured, he said. A third video that emerged on Tuesday showed her striking Fields after he put her in a head lock, Lott said.

The student “bears some responsibility. It started with her,” Lott said.

However, the sheriff described the arrest footage as disturbing and said the internal police investigation should conclude within the next day because “the facts pretty much speak for themselves.”

Court records show Fields has been named as a defendant in two federal lawsuits, most recently in 2013 in a case that claims he “unfairly and recklessly targets African-American students with allegations of gang membership and criminal gang activity.” A jury trial is set for Jan. 27 in Columbia.

In a 2007 case, a jury decided in favor of Fields and another deputy accused by a Columbia couple of unreasonable and excessive force during an investigation of a noise complaint.