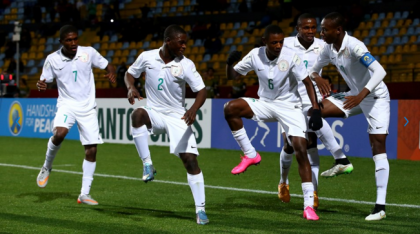 Golden Eaglets of Nigeria celebrating a goal scored against Australia at the round of 16 of the FIFA U-17 World Cup 2015 (Photo: Internet)

Reigning FIFA U-17 World Cup champions The Golden Eaglets of Nigeria have advanced to the quarter-final to face Brazil at the 2015 U-17 FIFA competition.

Victor Osimhen got the first hat-trick of the competition and leads the highest goal scorer chart with 6 goals in 4 matches.

The tale of the first half was compacted into a three-minute period as Nigeria scored twice sandwiched either side of a gilt-edged opening for Australia.

The Aussies started in pro-active fashion, but it was Funsho Ibrahim Bamgboye who hit the post with a rasping shot from the edge of the penalty area as Nigeria’s first effort narrowly failed to break the deadlock.

Almost immediately Nigeria were two in front as Funsho Bambgboye went to ground in the penalty area, and Kelechi Nwakali coolly slotted home the resultant penalty.

The two goals seemed to inspire the Nigerians who took a greater hold as the half wore on creating several half-openings around the Aussie goal.

Nigeria continued their powerful performance after the break, and although Australia dominated possession for periods, it was the Africans who ended the contest with a third.

Osimhen scored twice in the space of six minutes, the second with another laser-perfect drive into the top corner.

The deflated Aussies conceded to more goals in the dying minutes as firstly substitute Edidiong Michael Essien, and then Samuel Chukwueze, inflicted further pain as Nigeria stormed into the last-eight in confident fashion.