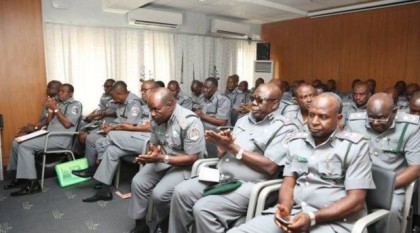 According to the communique signed by the Public Relations Officer of the Nigeria Customs Service, Wale Adeniyi, an imperative mandate as part of on-going re-organization in Nigeria Customs Service, 34 Senior Officers have been retired from Service with immediate effect. The re-organization of the Service is one of the core mandates of the Comptroller-General of Customs, Col. Hameed Ali (Rtd).

Those affected in the exercise are five Deputy Comptrollers-General of Customs (DCGs) who have earlier given notification to the Comptroller-General for voluntary disengagement. They are John Atte MFR, Ibrahim Mera OON, Musa Tahir mni, Austin Nwosu and Akinade Adewuyi.

Three others, of the rank of Assistant Comptroller-General are also affected in the re-organization exercise. They are Madu Mohammed mni, Secretary to the Nigeria Customs Board, Victor Gbemudu, Zonal Coordinator Zone ‘A’ and Bello Liman, Assistant Comptroller-General, (Headquarters). The rest are of the rank of Comptrollers serving in Customs Headquarters, Zonal Offices and various Area Commands.

The Comptroller-General of Customs stated that the retirements were part of measures to kick-start the repositioning of the Service for improved performance.