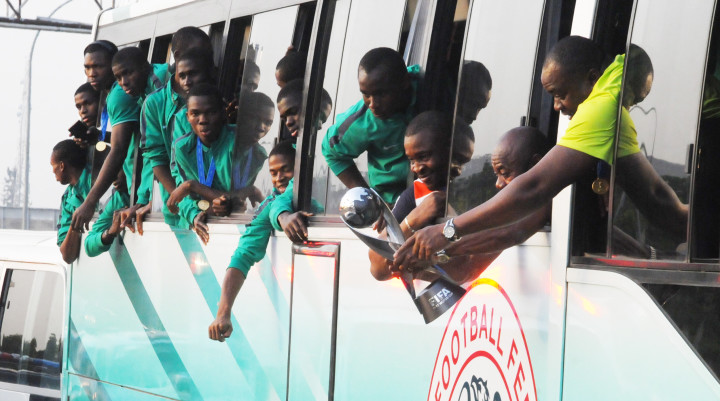 Golden Eaglets, in a road show in some major streets in Abuja (Photo: Internet)

Fans, in thousands on Wednesday converged on the Nnamdi Azikiwe Airport Abuja to welcome the 2015 FIFA U-17 World Cup champions, Golden Eaglets.

The fans cheered the eaglets and their officials as they got off the plane.

The Eaglets were later taken round in a Luxurious bus some major streets of Abuja metropolis.

Director-General of the National Sports Commission, Alhassan Yakmut, while welcoming the Eaglets at the airport, had said the players have further entrenched Nigeria on the world football map.

“The boys have put us above other countries in Africa and in the world, since they are the first country to win the FIFA U-17 World Cup back-to-back, and this is why we are celebrating.

“Nigeria is the best country and that is why we are celebrating this arrival,’’ Yakmut said.

He added that President Muhammadu Buhari, who returned to the country’s helm of affairs on May 29, has come with lots of good luck for the country.

He disclosed that the Minister of Youths and Sports, Solomon Dalong, would host the Eaglets to a dinner later in the day at the Transcorp Hilton.

He also said President Buhari would later receive the Eaglets on a date to be fixed later.